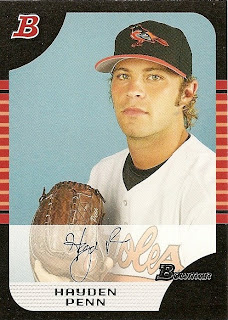 Okay, I'm finished talking about Hayden Penn's bad luck. The dude had an engraved invitation to the Orioles starting rotation this year, which had looked like this in February:

Hayden is of course out of options, so even if he had been just so-so in the Grapefruit League, chances were good that he would have at least snuck onto the Opening Day roster as a long reliever. Instead, the young righty put up this stat line:

In case you're wondering, that's about what it takes to get beat out by the likes of Mark Hendrickson, Adam Eaton (who seems like the early favorite to be my Most Despised Oriole of 2009), and Alfredo Simon. With the writing on the wall, GM Andy MacPhail was at least able to trade Penn to the Marlins for similarly out-of-options shortstop Robert Andino. Robert is the one-time Marlins shortstop of the future who has obviously been surpassed by Hanley Ramirez; a Mendoza-like batting average will do that to you. But he is a strong defender, and the O's woke up on Wednesday and realized that Cesar Izturis wasn't going to play 162 games this year. So Andino has some value, I suppose.

Thanks for making our starting rotation that much more gruesome, Hayden. Better luck in Florida.
Posted by Kevin at 10:01 PM