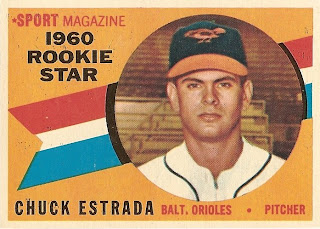 Chuck Estrada is a name that gets lost in the shuffle of Orioles lore. Among his contemporary "Baby Birds", the big name was Milt Pappas, but Steve Barber and Jerry Walker also loomed large. By the time the O's were finally ready for prime time, Wally Bunker, Dave McNally, and Jim Palmer were the fresh faces and homegrown arms. But for a few years, Estrada seemed primed to go toe to toe with them all.

In 1960, the righthander from California was 22 years old and was thrust into the rotation as a rookie. He responded by tying Jim Perry for the American League lead in wins (18) and allowing fewer hits per nine innings (7.0) than any other junior circuit pitcher. He completed 12 games and notched a 3.58 ERA. Together with Walker, Pappas, Barber, and Jack Fisher, he gave manager Paul Richards five promising moundsmen - all 22 or younger. Estrada was the best, making the All-Star Team and being named The Sporting News' Pitcher of the Year. Despite these accolades, he was a distant second behind O's shortstop Ron Hansen for Rookie of the Year honors. Baltimore first baseman Jim Gentile was the only other A.L. player to receive a vote. (Is it any wonder they jumped from 74 to 89 wins that year?)

Chuck defended his H/9 crown in 1961, lowering the mark to 6.8. At 15-9, he had less wins but a slightly better win percentage. His 3.69 ERA represented only a handful of extra runs allowed over an entire season, pretty remarkable considering that his 132 walks led the league. But the cracks in the armor appeared the next year. At 3.83, he had his first below-average ERA. Of greater concern were his league-worst 17 losses, against just 9 wins. Of course, his run support was lousy: the Birds scored three or less runs for him in 20 of his 33 starts, and tallied an average of 3.38 runs per start. Sadly, it would be his last healthy season.

Despite the popular conception that Paul Richards babied his young pitchers (Milt Pappas in particular), the stats tell a different story. In Estrada's case, he threw over 200 innings in his first three seasons, all before the age of 25. That's a total of 644 frames. Elbow injuries cropped up in 1963, and from that season until his retirement in 1967 he racked up only 120.1 innings. His earned run average climbed each year, from 4.60 to 9.41, and his career was over at 29.

So the next time you hear about how much more durable pitchers were in the good ol' days, just remember that there were still plenty of casualties.
Posted by Kevin at 11:33 PM