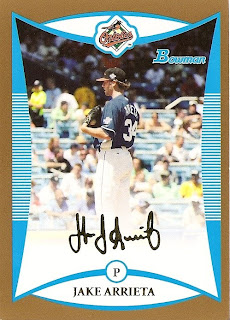 This card serves as a reminder that help is on the way, and soon. Chris Tillman (#22), Brian Matusz (#25), and Jake Arrieta (#67) are all ranked in Baseball America's Top 100 Prospects list for 2009, and all three pitchers could be in Baltimore's major league plans in 2010. There's no sense in rushing such young talent. I try to remind myself of that every time I fret about the current state of the O's pitching staff, as was the case last night. I was sitting in Nationals Park watching five of the first six batters reach against Alfredo Simon, who is starting 2009 as our third starting pitcher. The Orioles were in a 4-0 hole thanks to a Josh Willingham grand slam, and I found myself explaining to a stranger behind me that the righthander was plucked from the Mexican leagues.

In all fairness, last night's game could have been much uglier. Simon buckled down after being taken deep, pitching another four and one-third innings before giving way to Jamie Walker. Although it was chilly, I had a good time. Some observations:

-There were several large, odd-shaped things wrapped in butcher paper inside the main gates. I assume they were statues and that they'll be unveiled for the home opener, but it still looked pretty sloppy.

-I let out a loud "O!" during the National Anthem, and heard a similar shout ripple through the stadium; for the non-local readers, it's a Baltimore tradition to punctuate the line, "O, say does that Star-Spangled Banner yet wave..." with a war cry for the Orioles. It's even done at Ravens games and other various events. Some Phillistine Nats fan behind me muttered, "Pathetic". I assume he was talking about the home team.

-Speaking of which, I didn't truly appreciate how bereft of star power the Nationals are until I saw a guy wearing a Jason Bergmann jersey. But hey, who am I to judge a guy who spends over $100 on the jersey of a pitcher with a 10-19 record who didn't make this year's Opening Day roster?

-I wonder if Luke Scott will get a haircut this week. He was rocking an impressive mullet last night.

-The Oriole bats are looking as strong as advertised. They had 16 hits, although they weren't strong in the clutch (11 left on base). Aubrey Huff's three-run homer was the only big blow in a 5-4 loss, and Nick Markakis was 3-for-3.

-Chris Ray was also sharp, pitching a scoreless two-thirds of an inning and keeping his cool as the Nationals kept fouling off pitch after pitch. Coming off of Tommy John elbow surgery, he did not allow a single earned run this spring.

-I may look upon the Nationals with a lot of scorn, but the racing Presidents are ridiculously entertaining.

-Gregg ZAUN's scoreboard mugshot is hilarious. Look for it if you're going to a game this year.

Enough talk of exhibition games. Tomorrow we PLAY BALL! It'll be my first Opening Day at the Yard, so keep your fingers crossed that the rain (and CC Sabathia's best stuff) stays away!
Posted by Kevin at 8:47 PM

I think it'd be funny if the vendor who told you he was an Orioles fan is actually a huge Nats fan and mentioned that he "conned an O's fan" into tipping him.

Have fun at the Yard on Monday, Kevin. Wish I could be there. And keep your arm loose, we may run through A LOT of pitchers.

I love the racing presidents! I have a Thomas Jefferson bobblehead.

I think that was actually Jason Bergmann! We was probably staying close by in case one of the Nats would fall prey to a pulled muscle in the cold weather.

nice summary - lookin forward to a Victory summary after todays game. give that CC guy the business.

William - I considered the possibility, but hey...those guys work hard for their money anyway.

Bob - Fortunately we only ran through six pitchers tonight!

Tim - That's a distinct possibility. I think I spotted Odalis Perez heckling the Nats too.

deal - Oh, we gave him the business!

Is Zaun's picture that same one used on the MLB and Orioles websites when you pull up his career stats? That is hilarious!

Tim - Yes it is. He looks like he's missing half a face.