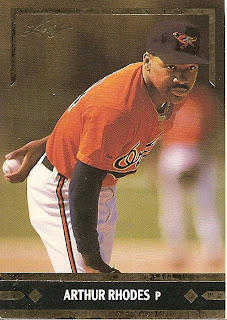 That's right, 1991. Oh, to be athletic and left-handed. Arthur Rhodes was a member of the 1993 Orioles team on which I cut my baseball-fan teeth, and has outlasted all of his teammates from that squad, save for 46-year-old Jamie Moyer, who also happens to be...a southpaw pitcher. Rhodes is still plugging as a 39-year-old reliever with the Reds, and has pitched six scoreless innings so far in 2009. One of his current teammates, outfielder Jay Bruce, was one year old when the O's drafted Arthur in 1988.

But my favorite tidbit about Rhodes' longevity is that he's the last remaining active player who played a home game in Memorial Stadium. He pitched three games on 33rd Street with little success (6.14 ERA), but he pitched there all the same. Whenever he retires, another piece of Baltimore's baseball history will be relegated to the dusty past. Thankfully, that day might not come for a long time, especially if he picked up any pointers from ageless lefty teammates like Moyer, Randy Johnson (still going at 45!), and Jesse Orosco (who retired at 46).
Posted by Kevin at 11:22 PM

Those lefties always stick around.

Often, I find myself wondering why a certain pitcher is still playing (Glendon Rusch, I'm looking at you). I'll look him up and, invariably, he ends up being a lefty.

As a lefty myself, it's a point of pride. Although I have absolutely no talent to justify that pride.

Night Owl - I think it also pays to be ambidextrous. Greg A. Harris was, and he pitched forever too.

I know if I ever had a boy I would tie his right arm for the first 4-5 years of his life. Of course, the odds of me ever having a child are slim, and with my luck, he'd prefer the theater.

Max - Well, I'm a baseball and theater fan, but I did turn to one after I figured out that I wasn't any good at the other. You never know...