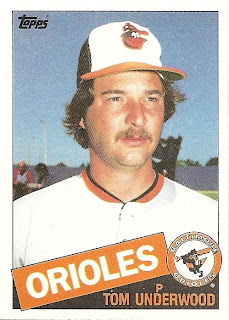 A gem of a fact tonight, courtesy of MASN's Jim "Not Catfish" Hunter: Koji Uehara is the second player in Orioles history to have a last name beginning with the letter U. The first was Tom Underwood, who teamed up with his mustache to win exactly one game with the Birds. Tonight, Koji tied him by allowing one run in five innings. Your glorious final: Orioles 7, Yankees 5.

It wasn't easy for the Japanese veteran, who threw 86 pitches and scattered five hits and a walk, but he frustrated the Yankee hitters when he had to, getting several pop-ups and lazy fly balls. Though there were only 22,856 fans at the stadium, the local fans still managed to shout down the visiting invaders, particularly when Mark Teixeira was at bat. He even got booed for cutting off a throw to home plate, which may have been a first in baseball. At one point in the game, play-by-play man Gary Thorne mentioned that 20 million Japanese people were expected to watch Uehara's major league debut, which really hit home. Millions of people from another country, people who wouldn't have known the Orioles from the Royals a few months ago, tuned in and watched them batter a very talented pitcher on a very powerful and internationally renowned team. It happened for the second day in a row. The Orioles announced themselves to Japan in grand fashion. Good stuff.
Posted by Kevin at 11:22 PM

not to throw water on your well earned yankees-ass-kicking fire, but i believe Kei Igawa, Hideki Irabu, and Kaz Ishii all won their debuts as well.

Your writing is like poetry. You're making me actually sort of interested in the O's again, of which I haven't been for well over a decade. That being said, it seems like the O's start the first half off great then fade when July comes. Maybe 2009 will be a different year.

P.S. -- can we start calling Adam Jones "Pacman"? The other Adam Jones doesn't like that nickname anymore.

Jones sure is gobbling up everything hit into the outfield. I loved the running catch last night where he blew a bubble during his all out sprint to the ball! Oh, to have that much talent!

Bring out the brooms for today!!!

Max - Oh, I'm well aware of those gentlemen. But Igawa and Irabu were much more expensive, so even if Koji comes back down to Earth it wouldn't be as devastating.

William - Thank you! Trust me, the grind to the finish line every year even wears me down. That's why I enjoy the bursts of success every year, no matter how fleeting. I want to savor the good stuff.

Tim - Hear, hear! I loved watching Jones laughing and grinning when Huff had to backpedal wildly for the popup to start the ninth.