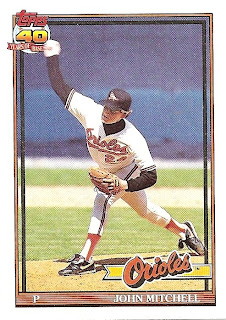 Only the most die-hard O's fans might remember John Mitchell, who pitched 24 games for the team in 1990 (6-6, 4.64 ERA). I've posted this card because he was born in 1965, the same year that Michael Francis "Mick" Foley came into this world. Whereas Mitchell's major league career ended after that 1990 season (and his pro career ended eight years later), Foley is still a somewhat active athlete, in a much different arena. Today, I'm taking a bus trip from Baltimore to Philadelphia to see the three-time WWF World Champion (and New York Times best-selling author) compete in a steel cage match at TNA's Lockdown pay-per-view event.

While most rational adults roll their eyes at professional wrestling, you'd be surprised at the physical toll that it takes on a person's body. Sure, the match outcomes are pre-determined and many of the moves are designed to look more painful than they actually are, but it's the cumulative effect of the matches that breaks down a performer's body. The canvas mat is not exactly a mattress, and falling on it fifteen times a night, for five or six nights a week, 52 weeks a year, adds up. Aside from that, accidents happen. These guys are much more than "phony actors", or any of the other derogatory phrases that are hurled their way.

It's amazing to me to think about the physical conditioning that it must take for a 43-year-old like Mick Foley to do his thing at a high level, and his opponent, Steve "Sting" Borden, is even older (having just turned fifty last month). I'm very excited, because Foley is one of my personal favorites and I've never seen him wrestle live. I'm appreciative of the opportunity, even while I fight the nagging doubts in the back of my head that somebody his age with four children at home should be risking his health. That's the daily dilemma of a wrestling fan.
Posted by Kevin at 7:30 PM

John Mitchell is one of many (many many many) over-hyped under-performing former mets prospects from years gone by. the o's would return the favor with "five-tool prospect" Alex Ochoa. If those five tools were warning-track power, striking out, getting caught stealing, missing the cutoff man, and getting injured - than he lived up to his promise.

It's beginning to look that Felix Pie is cut out of that same Alex Ochoa mold...yeesh.