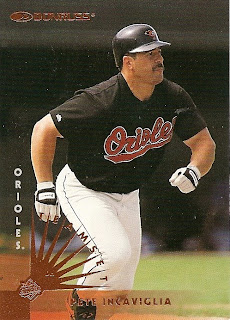 For whatever reason, a lot of former Orioles popped up in my blog reading today. The best part is that I finally have an excuse to post the only card I own that depicts "Inky" in black and orange. Around the horn:

-Former Mets and Phillies star/human train wreck Lenny Dykstra, who fashions himself a financial guru, is pretty much a fraud and a bad person, as laid out in this Mike Fish article. Among his indiscretions, he inserted a bunch of fishy provisions into an already agreed-upon sale of one of his car wash/retail centers...provisions such as a five-year contract for Pete Incaviglia to serve as the general manager of the business. Friends in low places and all of that.

-Mercurial ex-O's (and Mets, and Marlins, and Mariners, and Yankees, and Giants, and Blue Jays) reliever Armando Benitez signed with the (drumroll please) Newark Bears of the independent Atlantic League. The 36-year-old will be following in the footsteps of one-time Bears Ozzie and Jose Canseco, Jose Lima, and Rickey Henderson. Will his career trajectory bring him back to the major leagues? As lousy as pitching seems to be on average, I certainly wouldn't bet against it.

-Hall of Famer Frank Robinson, still working in baseball after more than a half-century, was named a special assistant to the commissioner. Essentially, he will serve as an advisor to everyone's favorite used car salesman. I'd like to imagine that every time Bud Selig runs one of his bright ideas by ol' #20, Robby will just stare him down in a menacing fashion until he goes back to the drawing board. Seriously...if you looked like this, would you dare cross one of the fiercest competitors of all time?

It was a surprisingly fun day, capped off by this mini-run of Birds in the news. Adam Eaton inexplicably taking a shutout into the eighth inning and the imminent goodness of a Friday never hurts.
Posted by Kevin at 11:01 PM

I'd like to skip the middle man and just have frank robinson beat selig to death and declare himself commissioner.

hey Jacob, I'd pay to see that. Frank would make a great commish.

Love Lenny, but always knew he was a fraud.

falls under the He's a jerk but he's our Jerk file.

deal - Yeah, I don't think anyone's surprised by the news. He's still a better person than Jim Leyritz, who drove drunk and killed a young mother.