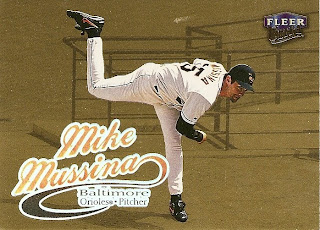 Last night, my dad and I took our second April trip to Camden Yards. Although we didn't root the Birds to victory over the Rangers, the game had a much more exciting finish than I ever would have expected. Mark Hendrickson did his best impression of a batting practice pitcher, allowing four home runs, including a leadoff shot in each of the first three innings and two longballs to Oriole Killer Ian Kinsler. He gave way to long reliever Brian Bass in the fifth inning with a runner on third, one out, and a 6-1 deficit. All that Bass did was twirl three and two-thirds scoreless innings. He walked one, allowed one hit, and struck out four. He defended his position like a pro, picking a runner off of first and snagging two consecutive comebackers and completing the throws to first for the putout. (When you've been treated to the antics of Daniel Cabrera and company in recent years, you learn to appreciate pitchers who field their position.)

The O's looked lethargic on offense all night, with Ty Wigginton seeming to provide all of the fireworks. Off to a slow start this year, he showed signs of life with an RBI single and a solo home run, the latter of which I sort of called. As he stepped to the plate, I saw that he was homerless on the year and told my father that he was due, "not that it would do us much good". Moments later, he deposited a Scott Feldman pitch into the Texas bullpen. Then again, I also called a Luke Scott two-run homer to right that ended up as a routine fly ball to left, so I'm not getting too full of myself.

So I told my pop that we probably should head for the exit after all. We were walking past the bullpen picnic area (just above and to the right of Mike Mussina in the above photo, gold-embossed though it may be) as ZAUN hit another weak grounder but reached second safely thanks to a poor Elvis Andrus throw. An enthusiastic crowd had already congregated in the picnic area, so we elbowed our way in to watch the potential rally amidst the masses. To our right, Jim Hunter and Rick Dempsey sat under the MASN canopy, waiting patiently to deliver the postgame report. Montanez (Birdland's favorite argument fodder) stepped to the plate, and the 27-year-old rookie dumped a single into right. Runners on the corners, and the buzz grew. Izturis hit a sinking liner to left field. I craned my neck, and at the last moment saw the ball elude the grasp of David Murphy. ZAUN scored, two runners were in scoring position, and the O's had turned over the lineup with nobody out! Brian Roberts hit a lazy fly ball to shallow right, and nobody advanced. Texas closer Frank Francisco was summoned to face Adam Jones. The young center fielder fought off a two-strike pitch into (guess where) right field, knocking in two runs. 6-5! Nick Markakis, already having extended his on-base streak to 26 straight games, represented the tying run. Those who remained from a surprising crowd of 41,000 were on their feet and roaring in anticipation. But there was to be no joy in Birdland...Nick the Stick struck out, and Aubrey Huff capped an 0-for-5 night with a fly out to left. So close, and yet so far.

In the end, it goes down as a loss. But that last half-inning will stay with me for a while.
Posted by Kevin at 11:52 PM