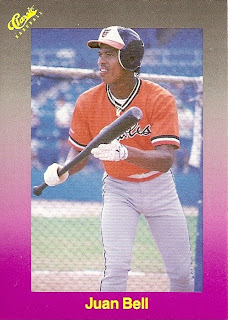 Juan Bell represents a dark moment in Orioles history, as he was the centerpiece of the trade that sent Eddie Murray to Los Angeles after twelve memorable seasons in Baltimore. The first of many pretenders to Cal Ripken's throne, George Bell's little brother hit .167 in 113 games as an Oriole and was an ex-Bird by 1992. I'm talking about him tonight to remind myself (and any other O's fans out there) that things have been worse than they are now, in the wreckage of a brutal week of baseball:

-Since they claimed first place with two straight wins in Texas to improve to 6-2, the team has lost five straight.

-In five of their seven losses, the O's have given up ten or more runs.

-The offense has started to sputter, scoring a single run in each of the past two games.

-On Friday night, the team's best starting pitcher (Jeremy Guthrie) was handed a seven-run lead in the second inning. He'd given it back by the fifth inning, and the Birds lost 10-8.

-In the last week, the following players have suffered injuries: Melvin Mora and Adam Jones (hamstring strains), Alfredo Simon ("degenerative" elbow), and Ryan Freel (probable concussion). The mythical Matt Wieters also strained his hamstring in a game for AAA Norfolk this weekend. Though the Powers That Be are doing some serious damage control, he should still miss a handful of games.

I'm trying to look on the bright side. Nothing is expected of the Birds in 2009. We're only 13 games into a 162-game season. Brad Bergesen (15-6, 3.22 at AA Bowie in 2008) makes his major league debut tomorrow against the White Sox, a sort of soft launch of the youth movement. Matt Wieters could literally be promoted at any time. The New Yankee Stadium, for all its opulence and phony grace notes, is no Oriole Park at Camden Yards. The Nationals are still the true laughingstock of Major League Baseball.

When the waiting gets to be too much, there's always schadenfreude.
Posted by Kevin at 9:50 PM

Here's what's going to happen: the Orioles will designate Felix Pie for assignment in AA ball, then, a couple weeks later, they'll call up a mysterious outfielder named Felix Cake.

William - I can't tell you how disappointing it is that the O's neglected to bring back Rocky Cherry. Janie Lane from Warrant probably could have used the royalties.

I like to think fleer would have done a 'Cherry/Pie' superstar special.