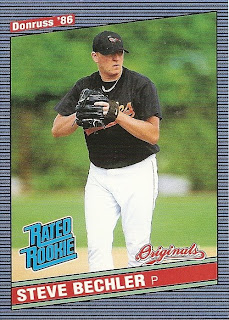 Terrible, depressing news today, as Angels rookie pitcher (and Silver Spring, MD native and Williamsport HS grad) Nick Adenhart was one of three people killed by a drunk driver, just hours after pitching six shutout innings in his fourth career game. He was 22, having been born in 1986.

The set design that was borrowed for today's card was, of course, 1986 Donruss. Steve Bechler is another young pitcher who died a sudden and needless death; his life was cut short when he suffered a fatal heat stroke during a Spring Training workout for the Orioles in 2003. A major factor in his death was a weight loss supplement containing ephedra, which has since been banned in the United States. He was 23 at the time of his death, and left behind a wife and an unborn child (daughter Hailie is now four years old).

Life is a fragile, unfair, concept. Death can be senseless, especially in the young. A close friend of mine was killed in a car accident on I-70 just weeks before she was to start college. It's been nearly a decade, and I still think about her each day. I still can't imagine the pain that Nick's parents, or Steve's parents or his widow, feel. It's important that we remember what matters. It's not that a baseball player died. It's that a young man - actually, two young men and a young woman - are gone because of a tragic incident that could have been avoided if another young man would have had the good sense to keep his car keys in his pocket.

I hope you take a moment today to remember and acknowledge the people in your life who really matter to you, and to give thanks that you still have them.
Posted by Kevin at 10:53 PM

I recently posted a card about Bechler and today's accident made me think exactly the same thing. It really seems to hit home when people younger than myself die in such tragic ways, whether they be a baseball player or average Joe. Nice post Kevin

I was eventually going to send you some cards, and one of them was a Steve Bechler -- except Donruss (original) spelled it "Belcher." Either way, nice post.

Thanks, O's Magic and William.