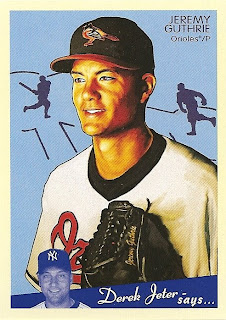 For one day, everything was as it should be.

The rain stopped just in time to play ball.

Mark Teixeira was booed loudly and lustily every time his name was announced. He was booed in between every pitch of every one of his at-bats. He went 0-for-4 in his first game after signing a multi-year, multi-million-dollar deal with the Yankees and holding a smarmy press conference in which he credited his wife with telling him to go to New York and claimed that he'd been a Yankee fan all of his life (something he never seemed to mention in multiple interviews proclaiming his interest in playing in his hometown of Baltimore...well, he was from Severna Park, but you know what I mean). He was cheered excitedly every time he failed to get a hit.

Adam Jones, the young center fielder who is being touted as a breakout candidate, reached base all five times, including two walks (a big development for someone who walked 23 times all of last year).

Jim Johnson, the surprise shutdown reliever of 2008, preserved the lead by stranding the tying and go-ahead runs on base in the eighth inning.

Cesar Izturis, the free agent who was brought in to stabilize the shortstop position, made two excellent plays in the field and helped the Birds put the game away with a surprise home run in the bottom of the eighth.

For once, the revitalized Baltimore fans were able to shout down the overbearing and entitled Yankee fans (most of whom were probably from New Jersey anyway).

As those fans filed out of the ballpark a little after 8:00 PM, there were overjoyed shouts of "First place!".

And I was there to be a part of it all.

I was very pleased, after a 2-1 Mets nail biter, to watch the O's spank the hated Yankees so fiercely. I think CC was thinking more about how many cheeseburgers he can but with $160 million rather than pitching.

Glad you could be part of it.

How many Polyesters had to die to make Sabathia's uni?

Go O's! I very much enjoyed putting a headline on our newspaper's account of the Yankees' opening loss.

Fun times was had by all. Orioles fans that is. It was a great way to start the season. First place, baby! Yeah!