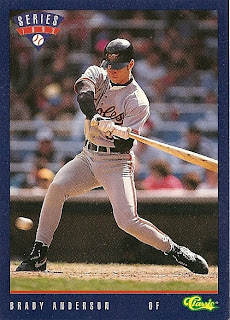 The photo on this Brady Anderson card is "full of fail", as the kids say. Take a look at the position of Brady's bat in relation to the ball. I've seen plenty of cards that depict players in less-than-ideal moments: a batter looking straight up in the air, to follow the flight of a pop-up, or a pitcher grimacing at a hanger that got away. But I'm not sure that I've ever seen a shot that blatantly shows the batter flailing at a pitch that's headed for the dirt.

I wonder how we'd feel if someone were selling trading cards with pictures of us screwing up. Here's Paul rear-ending a Honda Civic! I'll trade it for that shot of Amy spilling coffee on her keyboard! Has Brady Anderson ever seen this card? I wonder how he'd feel if someone asked him to sign it. I think he'd actually roll with it. I mean, the guy once got run over by a bus while rollerblading to the ballpark and played that night. We all swing at bad pitches now and then, and what does it matter in the grand scheme of things?
Posted by Kevin at 9:50 PM

I'd totally autograph a trading card of me getting engaged to a crazy woman. that would be the finest swing and miss of my life. the joyous fact that i didn't marry her means i worked the count and drew the walk...

I'd autograph a card of myself hiring a man who ended up being a daily negative drain on the work staff.

Night owl - Another good one.

As for me, my trading cards would probably have something to do with driving back to college after I graduated to visit my ex-girlfriend. Several times.

I'm laughing from all of your examples, especially you, Kevin. Which reminds me: my "swing and miss" card would picture me on the phone, leaving a message on the girl's voicemail who I just met at a party night before. That was basically me whiffing by a foot at one of Tim Wakefield's patented forkballs.