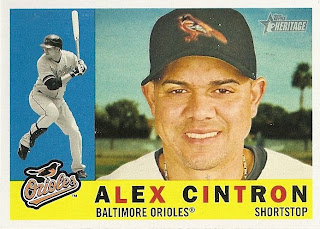 Believe it or not, the final game of the preseason takes place between the Orioles and the Nationals in Washington, D.C. This year's Spring Training was even more interminable than usual, thanks to the extra week or so that was tacked on to compensate for the World Baseball Classic. The O's had a 34-game exhibition slate, which doesn't include unofficial games against the Italian and Dominican WBC clubs. Then there were the intrasquad matchups that filled almost every open date on the schedule. I wouldn't be surprised if the players spend all day tomorrow in bed before Opening Day rolls around on Monday.

Alex Cintron is just one of several underwhelming ex-O's who landed in Nationals camp in 2009. Joining him were free-swinging outfielder Corey Patterson, wall-eyed failed shortstop Freddie Bynum, and of course the erratic Daniel Cabrera. Cabrera was the only member of that ex-pat quartet to go north with Washington, and he didn't exactly have a smooth go of it in the Grapefruit League. He posted a 6.39 ERA, which includes a loss to his former team last night (5 IP, 5 ER, 4 H, 4 BB, 1 WP, 1 HBP). Daniel also managed to hurt his neck a week ago while practicing bunting, which comes as no surprise to anyone who ever watched him "hit" in interleague games.

The Nationals current pitching staff might look a little less crummy than that of their beltway neighbors, but I sure as hell wouldn't want to root for them. At least the O's have a plan and a reason to hope.
Posted by Kevin at 2:50 PM

Interesting sidenote: Alex Cintron was a fellow "Baby Back" on thte 2003 Diamondbacks with this Orioles (Spring Training invitee) catcher who caught Randy Johnson's perfect game in 2004. His name? Robbie Hammock

William - I was hoping Robby would make the team, if only because the Camden Chatters had nicknamed him "Banana Hammock".