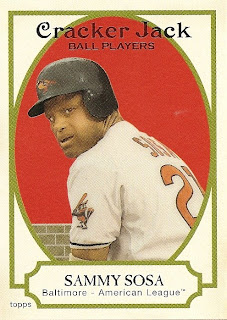 Since I didn't post early enough in the day to have an honest shot at making an April Fool of anyone, instead I give you Sammy Sosa. After all, he was baseball's cruel joke on the Baltimore Orioles and their fans. This card is something of a bad joke in itself. With Sammy being traded to the Birds in February, Topps put their finest Photoshoppers to work on an accurate facsimile of the Dominican slugger in his new uniform.

Then, Topps apparently found out that their finest Photoshoppers were on vacation that week, and passed the task along to some overmatched intern. That's the only explanation for this laughable picture. The bird logo on the helmet is too small. The "Fun Bird" sleeve patch was not worn after 2003 (sloppy research, guys). But the most glaring inconsistency is the rounded numerical font that has never been used by the O's, but just happened to be the Cubs' style.

I vacillate back and forth on the question of how to depict players who changed teams in the offseason. I always thought it was a cop-out to have a player pictured in his old team's uniform but identified as a member of the new team. But I'd certainly prefer that to a hack-job piece of faux art like this one.
Posted by Kevin at 9:29 PM

The Orioles signing Sammy Sosa was a horrible idea. It was almost as bad as the time that one team took on an aged Albert Belle. Oh, wait...

My all time least favorite Oriole.

William - Albert Belle's spirit lives on. During the lunacy of the Bedard trade rumors, I remember frenzied reports that the trade was on hold because Adam Jones's physical had turned up a similar hip condition. Thankfully, that seems to have been bunk.

Bob - It might be Mr. Ponson for me, another member of that enchanted 2005 team.