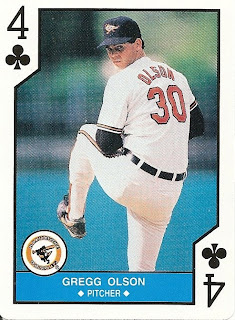 Gregg Olson is the four of clubs in this set of playing cards. But today, horrendous Orioles fifth starter Adam Eaton was clubbed for four runs. (You see what I did there?) He lasted four innings, allowed ten baserunners, and threw 100 excruciating pitches.

I have been bracing myself for the worst ever since it became painfully obvious that the O's were breaking camp with the chronically brutal Eaton in their rotation, but that didn't make it any easier to watch him pitch and blunt the momentum of a surprisingly successful season-opening homestand. His presence on the mound was a white flag being waved toward the Tampa Bay dugout, and I understood how Phillies fans could have booed him earlier this week when he showed up at Citizens Bank Park to claim his 2008 World Championship ring.

Look, I understand that the Orioles are taking some body blows this year to preserve their promising young pitchers. Bring the kids along slowly, let them progress through the minors for greater long-term benefit. But that doesn't mean that you have to waste every fifth game on a guy with a career ERA+ of 86 (again, 100 is average). Take a chance on journeyman Chris Waters or David Pauley, both of whom are waiting at AAA Norfolk. Bring up the most developed of the young arms, Brad Bergesen, who outpitched most everyone in Fort Lauderdale. Completely do away with the fifth starter and bring the bullpen-by-committee approach to an entire ballgame. Place a call to Fernando Valenzuela and see if he's got one last comeback in him. Pretty much anything would be preferable to Adam Eaton. Unless Dave Trembley takes advantage of an upcoming off-day to skip Eaton's next turn, he'd be slated next to pitch in Fenway against the Red Sox. The mere thought makes me break out in a cold sweat.

Am I being reactionary? Sure. But I value the little bits of my sanity that the O's have not yet taken.
Posted by Kevin at 11:01 PM

Only in Philly would the fans boo a member of the team that brought their first World Championship (in any sport) in almost 30 years. Sad.

You would think they could let bygones be bygones on the day that they raised the banner, but there you go.