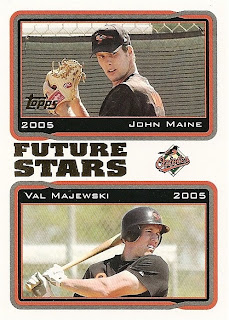 As I mentioned last night, last year's Orioles Minor League Pitcher of the Year made his major league debut tonight against the White Sox. He gave up three runs (one earned) in five and two-thirds innings, striking out four, and left with a one-run lead. It was a promising beginning, and a more auspicious first try than that of John Maine. I considered a last-minute effort to attend tonight's game, but the overcast skies scared me away. If only I'd stayed away from Maine's debut.

It was July 23, 2004, and my college roommate Mikey and his girlfriend Julianne had gotten four tickets to the O's-Twins game from her father's work. I honestly don't remember much about the game. It was one of those goofy floppy hat giveaway nights, and it doesn't get much goofier than orange, black, and white camouflage with an adjustable neck string. As you can see, I turned it into a rally hat.

Not that the rally-ization of the eyesore headwear did any good. 23-year-old John Maine set the Twins down in order in the first inning, but came undone in the second. The first four runners reached in a three-run frame for Minnesota, highlighted by a two-run single from Corey Koskie. The rookie pitched out of a bit of trouble in the third but allowed four hits (including a Jacque Jones leadoff home run) in the fourth before giving way to John Parrish. His final line: 3.2 IP, 7 H, 4 ER, 3 BB, 1 K, 1 WP. As he left the mound trailing by a 4-1 score, I probably yelled some none-too-charitable things at him. Probably something about not letting the door hit him in the butt on the way back to AAA Ottowa. It was a steamy summer night, the team was already eight games under .500, and I was young (okay, 22) and immature.

The O's couldn't dig themselves out of the hole that their brand-new starter had dug, managing just a two-run spurt in the seventh before a ninth-inning, two-run homer off of Buddy Groom gave Corey Koskie a four-RBI night. As the night wore on, Mikey and I amused ourselves by cheering for the Twins' batboy, who frequently sprinted to and from the visitor's dugout on our side of the field. Your final: Twins 7, Orioles 3. John Maine did indeed return to Ottowa, his spot start a flop. He wouldn't get a chance to improve upon his 0-1 record and 9.82 major league ERA until 2005, when he was marginally better (2-3, 6.30 in 10 games) but still nothing to write home about. Then it was off to the Mets with Jorge Julio in exchange for Kris Benson. He's gone 31-23 in three seasons since, with better-than-league-average ERAs in each campaign. His peripherals have been declining in each of those three years, but he's still carved out a better career than his shaky initial trip to the mound would have indicated.
Posted by Kevin at 11:05 PM