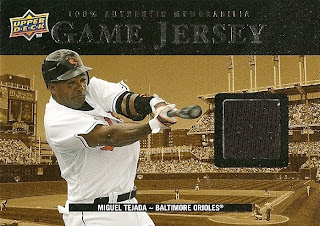 Please accept this Miguel Tejada game-used jersey swatch as a mea culpa for the rare missed day on this blog. I was foolish enough to think that attending a friend's wedding with a 4:30 PM start time in Lancaster, PA would give me time to make it home and post before midnight. Instead, we closed down the reception at 10:00 and reconvened at a nearby hotel where several friends were staying overnight. My friend/designated driver Mikey and I finally took our leave at midnight, but it was well worth it for the rare opportunity to reconnect with old college friends. Consider this as "Saturday's" post, and rest assured that the regular Sunday entry will run later today.

Because I'm a bit strange about these things, I'm more interested in the background of the card than the plain black jersey square that is meant to be the focal point. A quick eBay search shows me that the background photo seems to be the same for all game-used jerseys in this set, which is par for the course. But a closer look allows me to identify the stadium in question as Cleveland's Jacobs Field...seriously, you can call it "Progressive Field" if you want, but that sort of makes my stomach turn. I can also see a player's image and name on the video board in left field. It's former outfielder Vince Coleman, and he's identified as being a Kansas City Royal. "Vincent Van Go" played with K.C. for just a season-plus, from 1994 through August of 1995. This means that Upper Deck used a photo from their archives that was nearly fifteen years old. Pretty curious, don't you think?
Posted by Kevin at 1:24 PM

I didn't know my hometown was hosting you yesterday. Hope you enjoyed your time in Amish country.

Oh, I certainly did. The weather was great, and the beer (Lancaster Brewing Co. Strawberry Wheat) was plentiful and tasty.