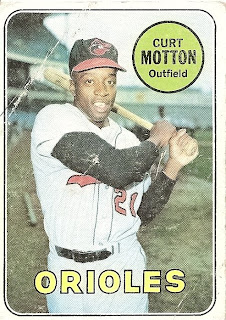 I recently told you about my trip to Cooperstown, but I neglected to mention something of interest regarding the Orioles.

Curt Motton is in the Hall of Fame.

I'm sure that sounds pretty crazy. After all, the guy was a career .213 hitter. Allow me to clarify by saying that his bat is in the Hall of Fame.

As I walked through the World Series exhibit, marveling at the ornate championship rings and trying to ignore the commemorative Red Sox video playing in the background, I noticed a display case with oodles of memorabilia. One of the items that caught my eye was the bat that Dave McNally, the great O's lefty, had used to hit a grand slam in Game Three of the 1970 World Series. This made him the first (and only, if I recall) pitcher in the history of the Fall Classic to club a bases-loaded home run. But when I took a closer look, the name engraved on the bat was "CURT MOTTON". It probably wouldn't make sense for pitchers to go to the trouble of carrying their own lumber, so it seems that Dave grabbed one of Motton's bats. Curt certainly wasn't using it; he did not appear in any games that postseason.

Go figure: a historic World Series home run was hit off of the bat of a guy who never even saw the field. Whatever it takes to get to Cooperstown, I guess.
Posted by Kevin at 5:33 PM

I am actually surprised that a starting pitcher would not have his own bats - he would be getting 2-4 ABs every 4th day back then (4 man rotation, no DH, longer starts and less situational replacement of pitchers).

But a great story none-the-less.

As they would say on the diamond - "good eye, Kevin"!