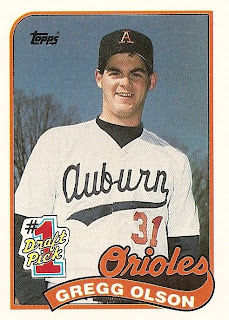 UPDATE: It's been brought to my attention that Le'Ron went to Alabama, not Auburn. As someone who is friends with an Auburn graduate, I am aware that such a lapse is a cardinal sin on my part. The lesson, as always: no matter how sure you think you are, always look it up first. Oops.

From one McClain to another. Sure, the player pictured above is closer Gregg Olson, the newest inductee to the Orioles Hall of Fame. But I posted this card because it depicts "the Otter" in his Auburn Tigers uniform. Since the O's have the day off, I don't think they'll hold a grudge if I talk a little football. The Ravens opened the NFL season in style today, pounding the visiting Bengals 17-10 with a major contribution by another Auburn Tiger, young fullback Le'Ron McClain. After carrying the ball 16 times total in the 2007 season, the second-year pro had a career day, toting the pigskin 19 times for 86 yards to wear down the Cincinnati defense. He also showed good hands out of the backfield, grabbing two passes for 24 yards in support of rookie quarterback Joe Flacco. He moves pretty well for a guy who tips the scales at 260 pounds. In case you're curious, Gregg Olson is listed at 206 pounds. At 6'4", Gregg stands four inches taller than Le'Ron.

While I certainly wish that Baltimore had two strong franchises to root for, it is nice to be able to celebrate a strong performance by one club. The Orioles' neighbors in purple and black will have to keep me distracted until the tenants of Camden Yards are ready to uphold their end of the bargain.
Posted by Kevin at 9:39 PM