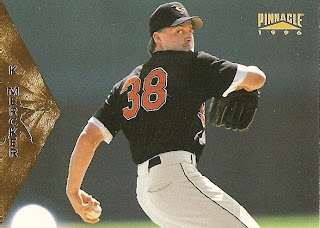 I like to think that I'm pretty on-the-ball when it comes to Major League Baseball and the guys who play it. So it's a bit humbling to admit that I was completely taken by surprise to read that Kent Mercker was considering retirement at the conclusion of the 2008 season. I was shocked to learn that he was still pitching.

A dozen years ago, the Orioles thought they'd scored a coup by prying the lefty away from Atlanta with free-agent dollars. He'd been a good fifth starter for the Braves, usually keeping his ERA in the threes and even tossing a no-hitter in 1994. By adding Mercker to rotation that already included Mike Mussina, Scott Erickson, fellow newcomer David Wells, and any one of a crop of promising rookies (Jimmy Haynes, Rick Krivda, and Rocky Coppinger), the O's were convinced that they had the arms to take them deep into October.

Reality set in early and often as Kent had the most wretched first half of his career. He failed to surpass five innings in five of his first six starts. He allowed five or more runs in half of his twelve starts as an Oriole. The gruesome totals: 3-6, 7.76 ERA (nearly three runs above the league average), 1.86 WHIP, 12 HR in 58 innings. The fans of Baltimore breathed a sigh of relief on July 21, when the team cut their losses, dealing him to Cleveland for...Eddie Murray? I don't care if he was 40 years old, I certainly would've made that trade in a heartbeat.

Though Mercker managed to save face with the Indians in a bullpen role, it's still pretty remarkable that he got up off of the mat and pitched for upwards of another decade. He eventually reinvented himself as a solid reliever for a number of teams, and persevered despite losing two full seasons to injury. So if this is truly the end of the road for "Mercules", as his Baseball Reference page sponsor calls him, he's got a lot to be proud of.

Then again, he's also the guy that soured my father on free-agent pitchers from the National League. You win some, you lose some.
Posted by Kevin at 7:18 PM

You made my day by referencing Rick Krivda and Rocky Coppinger...two great names, two mediocre pitchers.

William: Some day we will use Krivda, Haynes, Coppinger, et. al. rookie cards as currency.

...and when that happens, I will become the Warren Buffet to your Bill Gates.

I thought Rocky Coppinger was going to be a big pitcher for the O's. Not to be.