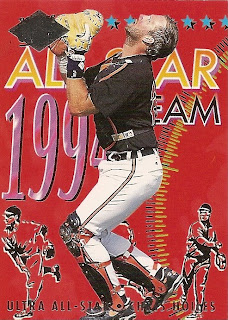 It might be somewhat unbecoming of me to kick the Yankees while they're down (sorry, Eric), but I'm still stinging from the weekend sweep in the Bronx and I need to find comfort where I can. As of last night, it's official: the New York Yankees will fail to make the playoffs for the first time in a non-strike season since 1993. To give you some idea of how long it's been, that was the final year of the traditional divison alignment: two seven-team divisions in each league. Roberto Alomar and the Toronto Blue Jays won the American League East en route to their second straight World Series title, and Frank Thomas' Chicago White Sox took the crown in the West. The Buck Showalter-managed Yankees shook off years of ineptitude to be runners-up, seven games behind the Jays. Just three games back of the Yankees were my Orioles, tied with a powerful Tigers team. The offensive standout of that Baltimore team was the man you see above, stalwart catcher Chris Hoiles (.310 AVG/.416 OBP/.585 SLG).

As you can see, it's been a long time since I've had the chance to relax and enjoy the postseason without having to worry about the damned Yankees buying another ring. Of course, there are still those Boogeymen from Boston, to say nothing of the Dodgers and the detestable Manny Ramirez. But I'll take what I can get, you know? In the meantime, it doesn't matter that New York will win over 90 games, or that the Birds will finish miles behind them in last place. Today they are a third-place time, incapable of even sneaking in as a wild card. It serves them right for trying to rely on immature drunks like Sidney Ponson and insincere steroid abusers such as Jason Giambi. Take it to the golf course, boys.
Posted by Kevin at 8:04 PM

Ouch. Oh well, here's hoping the Vikings can at least make the playoffs this year.

Tractor man!! There's only one 23 in my heart. Great blog, keep it up.