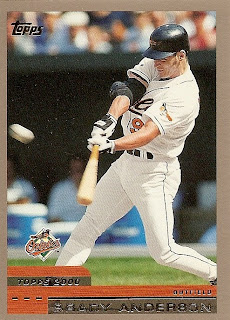 The Orioles wrapped up a wildly successful season with a win in a wild affair. Baltimore jumped out to a 6-1 fifth-inning lead, thanks to a home run by Jeffrey Hammonds and a pair of longballs and four RBI from the unlikeliest of sources: first baseman Jerome Walton, the former Cubs Rookie of the Year who was playing in just his twenty-sixth game of the year. But O's starter Jimmy Key, who seemed poised to scoop up his seventeenth win, hit the wall in the bottom of the fifth, surrendering a two-out grand slam to Jeromy Burnitz to bring the Brew Crew within a run. A double and a walk put the go-ahead run on base, but Key wriggled out of further trouble by inducing a flyout off the bat of ex-Oriole Jack Voigt.

Converted catcher Nerio Rodriguez failed to hold the one-run lead for Key, giving up a game-tying double to Mark Loretta in the sixth inning. The score remained knotted at six until the top of the eighth, when Brewers reliever Al Reyes loaded the bases. He was replaced by Mark Davis, who proceeded to hit Brady Anderson with a pitch, scoring Aaron Ledesma with the eventual winning run. The ageless Jesse Orosco, the fifth of seven O's pitchers on the day, picked up the win with two-thirds of a scoreless inning, and pear-shaped righty Terry Mathews notched his first save of the year with a nine-pitch effort in the ninth.

With the victory, the Birds finished at 98-64, two games ahead of the wild-card Yankees. The Orioles had gone wire-to-wire, leading the American League East every day during the 1997 season. After dispatching the Griffey-ARod-Edgar-Big Unit Mariners in four games in the Division Series, the Baltimore Bats went cold against the Indians in a heartbreaking six-game ALCS defeat. Of course, the O's have not had so much as a winning record in the eleven seasons since.
Posted by Kevin at 1:00 PM