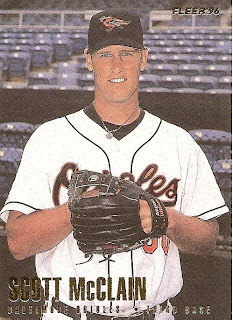 A few days ago, I heard the name "Scott McClain" in the context of active ballplayers. I wondered if it could possibly be the same Scott McClain who was in the Orioles' organization in the mid-90's. It seemed near impossible that anyone would hang around the minor leagues for so long. I didn't give it much more thought. Wednesday night, I watched the end of the Yankees-Rays game on ESPN, and saw the results of the Giants-Rockies game scroll across the bottom of the screen. Someone named McClain had hit a home run. Sure enough, it's the same guy.
Scott McClain was drafted by the Orioles in the 22nd round of the 1990 draft. To give you some idea of how long ago that was, I'll list the O's starting rotation that year: Pete Harnisch, Dave Johnson, Bob Milacki, John Mitchell, and Ben McDonald made the lion's share of starts. Interestingly enough, a high school pitcher out of Deer Park, Texas named Andy Pettitte was taken just ten slots ahead of Scott in that draft. The young infielder had a slow but steady climb through the Baltimore farm system, finally reaching AAA Rochester at age 23 in 1995; he hit 21 total home runs that year. But after seven years, the Orioles traded him to the Mets in early 1997 along with Manny Alexander for Hector Ramirez, a pitcher who would never crack their roster.
In all, Scott would log three and one-half seasons at AAA before getting the call to the big leagues. It was 1998, and the 26-year-old spent much of the campaign tearing up the International League to the tune of 34 home runs and 109 RBI (tying for second in both categories). He struggled in two cups of coffee with the brand-new Devil Rays, going just 2-for-20. He did score his first career run on May 17 against the Orioles. But Scott wouldn't make it back to the bigs for another seven years. He spent four of those seasons (2001-2004) in Japan, hitting 71 home runs for the Seibu Lions. Despite averaging 30 home runs and over 100 RBI since his return to the States, McClain received only cursory glances at the major league level from the Cubs in 2005 and the Giants in 2005 and 2007, respectively.

Now 36 and playing his nineteenth season of pro ball with his eight franchise, Scott McClain has gotten one more September callup. Wednesday night he launched a no-doubter to left field against the Rockies. After hitting 358 home runs as a professional, he'd finally hit his first in the majors. In one game, Scott established career highs in hits, runs, home runs, and RBI.

Congratulations, Scott. It's never too late to start fresh.
Posted by Kevin at 9:58 PM