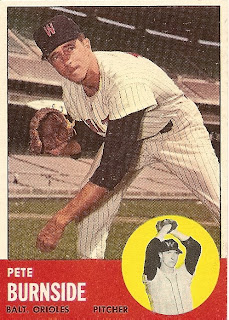 I don't know who you think you're fooling, Pete Burnside. I don't care what that tiny black text says at the bottom of your card. You're no Oriole. Look at you! Your feature photo is in pinstripes, with the Washington Senators "W" on your hat. You've got some nerve, putting on a blank white jersey with piping down the center for your inset photo. You didn't even bother dropping the "W" hat for that shoot!

Look, you make a good argument, Pete. You spent all of 1962 in D.C., only to be sent to the O's in December. It was too late to try out that orange, black, and white uniform, so Topps went to press with what they had. But branding you as an Oriole, even if it was in name only, was a mighty futile gesture. You made it onto the field for six whole games for Baltimore, seven-plus innings total. You allowed thirteen baserunners, and were lucky to only surrender four runs. The Orioles released you in May, and before you could say "Boomerang", you were back in the "W". You fared even worse there, unfortunately, and 1963 was all she wrote for Pete Burnside.

I hope you didn't try out a post-baseball career as a Master of Disguise.
Posted by Kevin at 5:12 PM

That's a neat card. Two entire people in the stands, and they seem to be walking away.