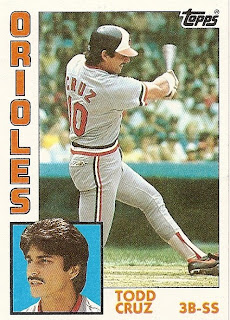 I really wish I wasn't writing this entry tonight, or ever for that matter. Former Orioles third baseman Todd Cruz, a member of the 1983 World Series Championship team, died on Tuesday. He had been swimming in the pool at his apartment complex in Arizona. The cause of death hasn't been announced, pending the coroner's examination. It's believed that he suffered a heart attack. Cruz was 52 - younger than both of my parents. It's never easy to hear about the premature passing of a player from your childhood, even if his career ended before you even knew what a baseball was. It troubled me in recent years to hear about the deaths of men like Dave McNally, Moe Drabowsky, and Mark Belanger, but these were guys who played before I was even born. There was more of a sense that they were from a bygone era. It was less shocking somehow. I don't know that I'm making any sense.

I find it hard to believe that two players from that 1983 team are deceased now, each meeting his end in sudden and tragic ways. Of course, I might have missed someone, but the other who comes to mind is Aurelio Rodriguez. He was released in August of 1983 and finished the season with the White Sox. He, like Cruz, was 52 when he was fatally struck by a car while walking through southwest Detroit in September of 2000. The driver had suffered a stroke and swerved onto the sidewalk.

My sympathies go out to Todd's family. He leaves behind two sons and a sister. I hope he's manning the hot corner in the Memorial Stadium of the great beyond, but I wish he didn't have to take that field so soon.
Posted by Kevin at 10:16 PM

This was the last card I needed to complete the 1984 Topps set. In fact, I was just looking at my set 20 minutes ago. I even pulled his card to look at it.

How sad. How sad for his family.

Andy - thanks for clarifying. ;)

He was my Godfather... He was an amazing person. Because of his career and where he lived after, I didn't get to see him much. He had such an impact and made me smile when he was around. I was lucky to have him in my life and call him "Uncle Todd".