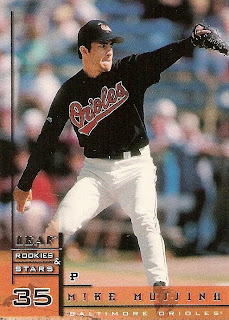 Alright, it's high time I showed a little magnanimousness toward a Yankee. Mike Mussina, at the age of forty and in his eighteenth major league season, is doing some of his finest work. Without him, the Bronx Bombers would have been eliminated from playoff contention long before September. On Sunday, he will take the mound at Fenway Park with a chance to do something that he's never done before in his career: win his twentieth game.

And I'm rooting for him to do it.

It's taken eight years of bitterness to reach this catharsis; it certainly doesn't hurt that he's facing the just-as-odious Red Sox in this crucial start. Every once in a while, there's nothing wrong with holding on to a good old grudge: Jeffrey Maier, Bob Irsay, Joe Namath. But this one has run its course. Mike Mussina gave the Orioles and the Baltimore fans nine-plus great years, only to watch the team crumble around him due to the ham-fisted management of Peter Angelos and his cronies. So when his contract came up and the owner tried to get cute with him, he washed his hands of the situation. Sure, the Yankees paid him big bucks. Can you honestly say you would have turned down that money?

Even having watched Mussina in his prime, and keeping tabs on him in the years since his departure, it's easy to overlook how good he really is. Earlier this week, he won his 269th career game, surpassing Jim Palmer on the all-time list. Palmer himself recently championed "Moose" for the Hall of Fame, pointing out how much more impressive his accomplishments are when placed in the context of the offense-crazed era of the 1990s and 2000s: the steroids, the expansion-diluted pitching staffs, the smaller ballparks. It was refreshing to see Jim ignore all of the short-sighted hooey about Mike's lack of 20-win seasons, Cy Young Awards, and championships. If the greatest pitcher in Oriole history can put aside a sense of blind loyalty to the home team and sing the praises of Mike Mussina, I'm not one to argue.

You've got one more shot at the big two-oh, Moose. If this is the last game of your career, make it count.
Posted by Kevin at 11:29 PM

That right there is the Holy Trinity of Baltimore hatred.

I'm with you, Kevin. I've moved on from old grudges. For a long time even looking at the Indy Colts was like a knife to the gut. Then after a while it just caused wistful sadness, like seeing an old flame. Now I've gotten to the point where I enjoy seeing Payton Manning play and the Mayflower trucks hardly ever cross my mind.

Jeffery Maier, on the other hand.... he helped kill my love of baseball for a long time. Bleep him.

I meant to mention that I never got the anti-Mussina sentiment that went on. For one thing I wasn't living up there nor following the O's all that closely. And more than that I've never been one to blame a player who takes the free agent route. Whether its for the money, or to be closer to hame and family, I'd likely do the same thing.

I put John Elway on that list ahead of Joe Namath. Namath just did what he was supposed to - he was the opposing player. I still blame Elway as a key element in helping drive the Colts out of Baltimore.

Similarly, I dislike Eli Manning because of the way he "Elwayed" the Chargers (though the Chargers did pretty well in that trade - unlike the Colts).

Totally with you about Moose.