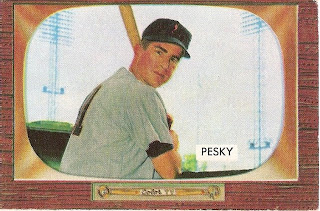 Of all of the cards that I feature on this blog, one of my favorite genres is the "cameo". Guys that even die-hard Oriole fans might take a look at and say, "Wait a minute...he was on the team?". You have your Reggie Jacksons, guys who spent a single year in Baltimore and moved on to greener ($$$) pastures. Then there are the Ozzie Guillens, players who drifted in at the end of their careers and were gone in the blink of an eye. Rarest of all are the vets who didn't ever take the field for the O's, and yet made their way onto a card clad in orange and black. So today's card even caught me off guard.

I received a small box in the mail from David, the expert on all matters concerning Tribe Cards. Contained within was my booty for participating in his Scratch Card Tournament, an autographed Ryan Minor card that I've just got to post here soon, as well as a varied and delightful assortment of other Orioles cards. But my jaw actually dropped when I pulled out this fifty-three-year-old beauty. Not only did it represent my first 1955 Bowman card of any sort, it featured one of the most beloved members of the Red Sox in a (hastily airbrushed) Orioles uniform.
Say what?

Having done plenty of research on Orioles history, I could tell you without even looking it up that Johnny Pesky never played Game One for the Birds. The card back mentions his most recent season, split between the Tigers and the Senators. Sure enough, Baseball Reference tells me that the infielder who had a piece of Fenway Park named in his honor signed with Baltimore as a free agent in December of 1954, only to be released three days into the 1955 season without having played in a game.

Wouldn't you know it? The day after this treasure arrived in the mail, word came down that the Red Sox are set to retire Johnny's uniform number (#6). It's a small world indeed. So thanks to David for helping me discover a previously hidden (to me at least) chapter in Orioles history!

P.S.: Now that I've done a quick search for 1955 Bowman, I see that there are some more gems out there, including fellow almost-Orioles Preacher Roe (Brooklyn Dodgers hero) and the excellently-named Matt Batts. I might have to take a trip to eBay soon!
Posted by Kevin at 2:25 PM

Hey! Glad you enjoyed the cards, especially the Bowman! :-)

Yeah, that's what I thought when I saw the title... Johnny Pesky was an Oriole??

April 1, 1958: Traded by the Baltimore Orioles with Don Ferrarese to the Cleveland Indians for Bud Daley, Dick Williams and Gene Woodling.