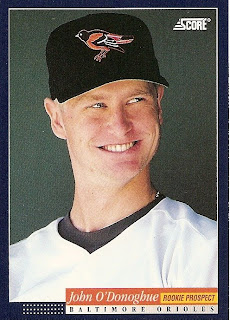 Okay, enough teasing. Last week, I got an email from the man pictured above. He'd found NumerOlogy and this blog, and wanted to tell me how much he'd enjoyed them. He hadn't been aware that he was the tallest pitcher from Delaware until he read it here, and joked, "Finally I came in first at something!". He also let me in on another tidbit he'd gleaned from SABR: he and his father were the only father-son duo to pitch in both the College World Series and the major leagues.

Of course, it's always a pleasant surprise to hear from a former Oriole player. In John's case, he was so gracious and seemed to have a sense of humor about himself, so I felt encouraged to ask him for an interview. He quickly agreed, and you can read the interview at NumerOlogy. His responses were more insightful and funny than I could have hoped for, and he's a former player who is truly appreciative of the fans. Thanks again, John!
Posted by Kevin at 10:55 PM

what a blogger coup. The article and interview were very interesting. It is great to hear of a former athlete having such a good outlook and perspective.

how much time did you spent preparing the questions. I thought they were really good.

Deal- Thanks! I spent the weekend kicking a few of the questions around my head, but for the most part I sat down Monday night and composed them.

Kevin, I've been busy catching up on your blogs (and a few others) since returning from Ike-inspired exile in San Antonio. Nicely done! I enjoyed the interview with John O'D. and the other postings.

I'm glad to be back.

Very cool interview. Who knows -- you keep this up and in a few years you may very well be asked to be an Orioles clubhouse writer. That'd be sick.

Bob - Glad you're back home safe and sound.

William - Hey, who knows? For now, I'm just having a blast doing something that I love.