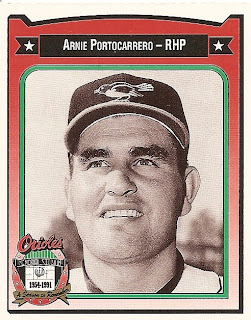 I'm continually amazed by the wide variety of people that find, and comment on, this blog. I've come to rely on my small but loyal group of regulars, who provide encouragement and insight and let me know that I'm not just writing to keep myself occupied for a bit. But it's the random visitors that remind me of the improbable enormity of the Internet. Anyone can find anything if they know where to look.

Just today, I received a comment on my August 26th Fernando Valenzuela entry, which was actually all about my experiences at a couple of very small performances given by Brian Vander Ark. The comment came from Second Motion Records, who apparently just signed Brian and are re-releasing his three solo albums. They were complementary of my post, and of course they were plugging their artist, but I don't mind. After all, I'd done the same thing myself, so it was relevant.

Last Thursday's brief eulogy of Todd Cruz apparently elicited a comment from his godchild, who shared a few words about the impact that "Uncle Todd" had on their life.

Back in April, I wrote about Sammy Stewart and his tragic drug addiction and incarceration. One anonymous commenter apparently had personal knowledge of Sammy and his family, and indicated that the former pitcher was working hard to turn his life around and repair his strained relationships. I hope for his sake - and the sake of his family - that Stewart is in earnest.

One of my earliest entries was a somewhat playful bit, wondering about the origins and implications of Arnie Portocarrero's name. I hadn't thought about it for months, but just a few weeks ago I was notified of a new comment. One of Arnie's children was doing a Google search for their father's name, and stumbled upon my blog. He or she corrected my crack genealogy: Portocarrero is Spanish, not Italian. They also offered assurance that Arnie was a great man, and not slow. The "slow children" remark I had made in that post was an offhand reference to Arnie, the mentally retarded character played by Leonardo DiCaprio in What's Eating Gilbert Grape. Based on the tone of the resultant comment, I assume no offense was taken.

These comments I've highlighted are a reminder that this blog doesn't exist in a bubble. The players that I write about are real, live people with children, nieces and nephews, friends, and (of course) fans. I can't take it for granted that I can write whatever I want with no consequences. For the most part, I take pride in keeping my opinions civil and respectful. When I want to bring humor to a subject, I do my best to put the emphasis on the silly rather than the cruel. I don't think I've censored myself, but I'm going to try to make sure that someone really deserves my vitriol before I tear them down (see: Ponson, Sidney).

If you're reading this blog, whether you're a friend, family member, an Oriole player, or just a collector and/or fan like myself, I'm glad to have you.
Posted by Kevin at 11:49 PM

I've been looking throughout the internet in search for a way to sell some baseball cards. I found a bunch of 1991 Crown/Coca-Cola All-Time Orioles cards when I was a kid, but tucked them away and forgot about them. I found them again a few days ago and was wondering if anyone would ever want to buy them. Do you know of any sites or anything that might be able to help me? I looked on ebay and they only have like 2 of these on there, so I'm lost. Plus I have no experience with this kind of stuff. Any info will be helpful. Thanks

Todays posting is interesting to me in that for 29 years now I have run the 'Ed Hughes Football League' a fantasy football league we named for the former Oiler head coach. Coach Hughes got a raw deal here in Houston and had a long and successful career as an assistant on several NFL teams, winning a Super Bowl ring with the Cowboys. Since we went online a decade or so ago I've heard from several members of Coach Hughes' immediate family via comments left and/or email. They too, like the contributors to your blog comments, seemed to be honored that our little league sought to remember Coach Hughes and they offered insights into his life.

Sometimes the internets are a cool place, no?

Shortman - Unfortunately I don't have much knowledge when it comes to selling/pricing cards either. I can tell you that the guys selling individual cards from this set on eBay for $1 to $3 each are on drugs. I'd guess that if you have the whole set, it's obviously more valuable still in the untorn sheets and shrink wrap then divvied up and loose. But I'm not aware that there's any great demand for these cards, as awesome as I personally think they are as an Orioles collector. You'd probably be looking at no more than $10-$15 for the complete set.

Commish - Amen to that. I even got an email from Les "Buster" Narum's daughter when I posted his card on the 1965 Topps blog, asking if I wanted any more of his cards. I replied with my address, but never did hear back from her. Oh well.

He was my grandfather. And just a lil tid bit of info... Portocarrero is actually of Portuguese and Spanish heritage. The line started in 11 century when the two royalties combines. Based on geneological research, I have found that it means "road/path to enlightment/riches". Just to fill ya in a little bit. He was not slow but a smart, kind, and very driven.