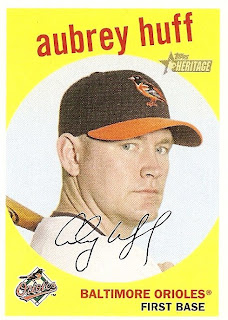 As I continue to grasp at straws to find something positive to say about the Orioles as they stand today, I realize that I haven't given Aubrey Huff his due. In the picture above, the 6'4" designated hitter/first baseman is looking over his shoulder, and with good reason. In the first year of a contract that pays him $8 million annually, he'd underperformed in a major way. His 2007 stats included a career-low 15 home runs and a fairly pedestrian 72 RBI. To compound his troubles, Huff opened his big mouth on talk radio. (Word to the wise: there is precious little to be gained from an appearance on "Bubba the Love Sponge".) Aubrey's comments raised the ire of O's fans, particularly his claim that watching game film was a "waste of time". Oh, and he might have said that Baltimore was a "horsepoop city" for nightlife.*

Aubrey Huff had his work cut out for him in 2008, but he struck an early blow by wearing an "I *Heart* Baltimore" shirt for the team's FanFest event in late March. It was funny enough that I was willing to forgive him, but many fans weren't won over so easily. No worries, because Huff was locked in from Day One. A notoriously slow starter, he put up decent power numbers in April and May before truly catching fire in June (.337 AVG). He's gone from hot to ridiculous, putting up 16 of his 30 home runs and 52 of his 98 RBI in 54 July and August games. With a month left in the season, he has several career highs in his sights: home runs (four needed), RBI (nine), doubles (three), and runs (four). His .311 batting average is close to his personal best of .313, and his on-base percentage and slugging percentage are currently above his own high-water marks. Huff is currently leading the American League in extra-base hits and total bases, and has been named A. L. Player of the Week twice.

So yeah, he's pretty good, even though he's not young and defensively gifted like Nick Markakis or speedy and adorable like Brian Roberts. Kevin Millar pointed out half-jokingly that Huff was even being overlooked by the team's marketing department, as he hasn't been featured in a T-Shirt Tuesday giveaway or on the cover of the monthly Orioles Magazine game program.

Okay, I've talked myself into it. Aubrey Huff for Most Valuable Oriole of 2008. Jeremy Guthrie, who unfortunately has a tired arm, is a verrrry close second, though. Who's your pick?