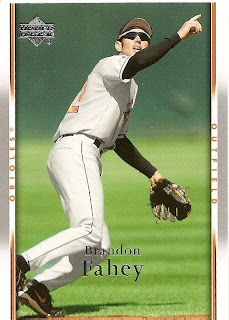 I'm not what you would call a Brandon Fahey fan. The guy is just the fringiest of fringe MLB players, a tiny white guy who's often overmatched both at the plate and in the field. Despite the fact that he's proven this time and again, he just keeps coming back on the Norfolk-to-Baltimore shuttle. He's like a bad dream, or a kernel of corn stuck between your back teeth, or maybe one of those irritating novelty candles that doesn't stay extinguished. Those damn things weren't funny in 1990, and they haven't gotten any funnier since. Brandon Fahey is one of those David Eckstein types who sticks around because he's so small and "gritty", and "scrappy", and "versatile", and lots of other code words for "untalented". Let's not even talk about his horrifying trial in left field. Eesh.

I'll give Brandon credit on one count, though; he might be a better ballplayer than his old man.

Bill Fahey was a backup catcher from 1971-1983, during which time he caddied for big names like Jim Sundberg, Gene Tenace, and Lance Parrish. His .241 career average was higher than Brandon's single-season best so far, but the younger Fahey has already surpassed his Dad's career highs in RBI (23 to 22), triples (2 to 1), and runs (36 to 18). He's matched his best mark in doubles (8). And in just three seasons, he's seen action in 174 games; Bill totaled 383 in eleven years. Brandon may have just two career home runs, both hit in his rookie season of 2006, but he makes 'em count: the first came off of Curt Schilling. If all of that isn't enough, the little guy has a hilariously maintained Wikipedia page, which proudly tells of his selection as AT&T Player of the Game on July 4, 2008.

So you see, there's hope yet for the Fahey bloodline. By 2120, Brian X. Fahey could be tearing up the Pan-American League (the third of the four major leagues) on the way to his second straight Triple Crown. Just you wait.
Posted by Kevin at 9:50 PM

I'm actually surprised you don't like Brandon Fahey -- he represents the regular joes who look whimpy compared to his bulky counterparts. He gives us a chance.

But yeah, his stats aren't good at all so maybe I do understand.