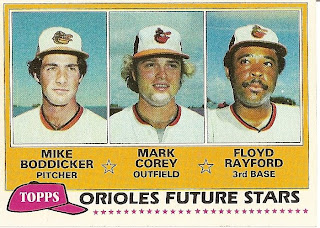 9/23/08: Somehow I had a brain cramp and didn't hit the "Publish Post" button last night. Forgive me.

Topps' Future Stars/Top Prospects/Rookies/etc. cards have always been a delicious exercise in guesswork. In 1982, the Reds' Future Stars were Scott Brown, Geoff Combe, and Paul Householder. Strike three, you're out. The 1980 Mets card featured Dan Norman, Jesse Orosco, and Mike Scott. Two outta three ain't bad. In this instance, they hit on one of the three up and coming Orioles youngsters. Mike Boddicker anchored the team's staff as they won their third World Series in 1983, and was an effective pitcher for a decade. But what of the others?

Floyd Rayford hung around into the late 1980s, and peaked with a .306 average and 18 home runs in 1985, so he at least had something of a career. Plus, as I've pointed out, he was an endless source of entertainment for my uncle. So even though "Honey Bear" is something less than a household name today, he was a better choice for Future Stardom than, say, 1987 selection Tim Pyznarski.

Mark Corey? Well, somebody at Topps just refused to give up on him. 1981 marked the third consecutive year that they had earmarked him as a Future Star. In 1979, he appeared in an Orioles Prospects triptych with John Flinn and Sammy Stewart. The following year, he joined Dave Ford and Wayne Krenchicki as the would-be O's greats. As you may have guessed, Mark never quite made it to the dizzying heights that Topps forecast for him. An 0-for-8 in 1981 slammed the lid shut on his career, leaving him with a career batting average of .211.

But he still had more of a career than 1995's Coming Attraction, Brian Sackinsky.
Posted by Kevin at 10:23 AM