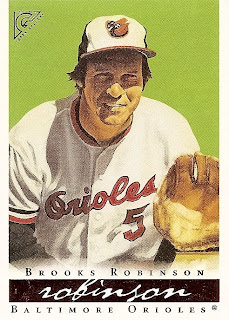 Today marks the seventh anniversary of one of the biggest tragedies in the history of the United States, but it also marks another milestone that's closer to my comfort zone. Six years ago, legendary Baltimore Colts quarterback Johnny Unitas passed away at the age of sixty-nine. It was a profound loss for the residents of my home city, which had come to adopt the lanky Pittsburgh boy as one of their own. Really, I can't say it any better than Roch Kubatko did today:

"I hope people here appreciate how fortunate we've been to have Johnny U. and Brooks as our own, two guys cut from the same cloth - legends in their respective sports who never outgrew Baltimore, never became too big to sign an autograph, talk to fans, invite them to sit down for a beer and a few stories. They're neighbors and friends who just happen to be two of the greatest players at their positions."

Part of the mystique of the great old Colts and Orioles teams was the way that the players, even the stars, made themselves a part of the community. They lived in this city, rubbed elbows with the blue-collar workers, even opened restaurants, bars, and other businesses of their own. It truly is remarkable that a number of those guys are still here in Baltimore. In addition to Robinson, Boog Powell and Jim Palmer are still highly visible and accessible. Moreover, Boog and Jim are directly involved with the franchise. We're talking about three of the greatest players in club history, still out there on a regular basis decades after their playing days. There are other Orioles of yesteryear who either settled here (Dick Hall) or work with the team (Rick Dempsey), and they're a living part of the city's - and the O's - history.

If you're an Orioles fan, or even a baseball fan, I hope you get a chance to meet these guys in your lifetime.
Posted by Kevin at 9:38 PM

Times have changed so the players as part of the community is never going to be the same.

I think it is the responsibility of the team to foster an environment that helps make players part of the community. The Flyers have done the best job of this in Philadelphia. The Phils try a variety of events and are fortunate enough to have several players interested in being in the community.

If teams and players don't do these things the gap between team and fan only widens.