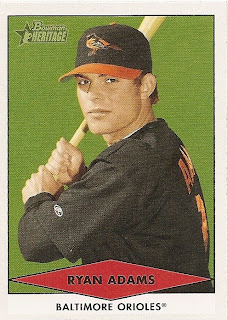 Before we get started, let's get the cheap joke out of the way: no, not that Ryan Adams.

Anyway, I pulled this card out of a pack of Bowman Heritage last winter and thought: Who in the name of purple elephants are you? When I found the answer, I was less than enthused. At the time he was a 20-year-old second baseman who had hit .236 in the New York-Penn League. This year he made some progress, though. With the A-level Delmarva Shorebirds, he hit .308 with 11 home runs and 57 RBI. Of course, there's still two sides to this coin. Ryan's defensive prowess is...bowling-shoe ugly, to borrow a phrase. 46 errors in 96 games. That's almost one for every two games. Perhaps sensing that his future might not be at second base, the Shorebirds gave him some trials at shortstop and third base. How did that work out? 1 error in 1 game at third, and 5 errors in 7 games at short. So the grisly total is 52 miscues in 104 games. He broke a decades-old South Atlantic League record held by Juan Samuel (who is now the Orioles' third base coach). Those are the kinds of numbers you'd expect over a hundred years ago, when gloves were the size and shape of today's batting gloves. You probably also won't be surprised to hear that Delmarva led the league in errors with 202.

Ryan Adams may yet have a future in Baltimore. But first, he should probably sleep with his glove under his pillow.
Posted by Kevin at 9:47 PM