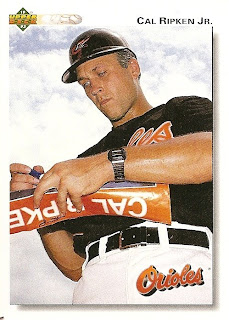 I recently received a request from reader Steve to feature this card, and I was happy to oblige. He noted that it's the rare card that pictures Cal doing the very thing that endeared him to his fans and brought him much of the credit that he received for "saving" baseball in the ugly aftermath of the 1994-95 players' strike: reaching out to fans, even when it meant sacrificing hours of his own time. I've written on a few occasions about the thrills I felt when I was able to spend just a few moments making small talk with the like of Brooks Robinson and Boog Powell as they signed my cards. But you might be surprised to learn that I've briefly met Cal Junior, and I fumbled the opportunity.

When I tell people that I spent Fall 2004 working in the Aberdeen IronBirds' front office, they often want to know if I was rubbing elbows with the Iron Man on a daily basis. I always tell them that Cal was - and still is - a ridiculously busy man; he's built a far-reaching business empire in his post-playing career, and he's not often seen at the stadium that bears his surname. Brother Billy is the near-daily presence, bringing attention to himself in his incorrigible manner. But I did share office space with #8 on one fateful October morning.

It was a Friday near Halloween, and the IronBirds staff was celebrating with a pot-luck breakfast: eggs, bagels, pancakes, Munchkins, you name it. It doesn't take much to make me happy, so this free and delicious bounty met my definition of a good morning. But just as we were all finishing our meal and dragging ourselves back to our cubicles and offices, he walked through the door unannounced, fresh from a meeting pertaining to the construction of the Little League baseball facility in the Ripken Stadium complex. The first thing that struck me was the sheer size of Cal. At a little over six feet tall, few people tower over me. I've always known that Ripken was 6'4", but it's something else entirely to see him up close. I also took notice of his steely gray eyes. It's fortunate for the rest of us that he chose to become a baseball player instead of a super-villain who uses the powers of hypnosis to make the people of the world bend to his will.

I was in a tough position. As the New Guy in the office, and someone who was around on a temporary basis, I assumed that I was the only one who had never met Cal. It seemed nervy and conspicuous of me to walk right up and introduce myself to the baseball legend in front of everyone. Asking him for an autograph when I was technically one of his employees would be totally out of the question. It had been much easier to approach Billy Ripken weeks earlier: he had been standing alone at that moment and while he had played in the major leagues for several years, his older brother was an absolute icon. So I stood off to the side in my khakis and my long-sleeved henley, trying not to gawk noticeably as the man who had been the face of the Orioles for two decades and who had redefined the position of shortstop sat a couple of feet away and partook in the most important meal of the day. While I certainly made an effort to soak it all in, the only clear memory I have is of Junior teasing Adam (one of the ticket sales representatives) for his personal take on the Mickey-Mouse-shaped pancake. Cal insisted with a laugh that the flapjack on his plate more closely resembled a bear's head.

I generally live my life with very few regrets. There have been plenty of times that I've taken a stab in the dark in various situations, precisely because I'd rather fall flat than hold back and wonder what could have been. But I've lived life as an Oriole fan for fifteen years now, and the one time I had a chance to meet Cal Ripken, Jr., I didn't even go out on a limb to say hello. As a result, all that I have is a half-baked anecdote about pancakes. I still wonder about that.
Posted by Kevin at 8:53 PM

I don't think that there is that much to regret in the story. that's a great story - even if you didn't formally meet the man, you've have a "brush with greatness" tale. Those are always good too.