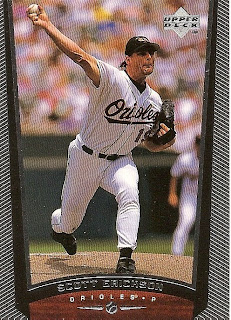 So, Scott Erickson is ready for a comeback.

Of course, nobody's going to be able to convince Scott that he's being foolish if he's made up his mind. Besides, compared to Jamie Moyer and Greg Maddux, he's still a young pup. In a year that has seen Carl Pavano and Mike Hampton return to the mound, who am I to say that a Scott Erickson comeback can't work? As starved as most teams are for pitching, someone should give him a Spring Training invite. I'll keep my ear to the ground on this one. It would make a good story, after all.
Posted by Kevin at 9:43 PM

Good lord, if we see Scott Erickson pitching to Mark McGwire next year it's time to start contracting teams.

Erickson's secret to regaining his youth has GOT to be marrying the ultra-hot Lisa Guerrero.

If he walked into Camden Yard this afternoon I bet they'd ask him if he wanted to start.