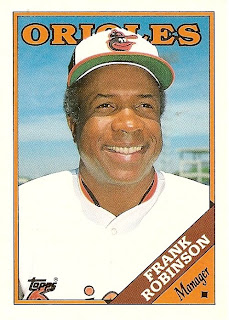 So my plans took a sharp left turn on Monday, and that day's entry is being brought to you on a Tuesday. Better late than never. Let's keep with the Frank Robinson theme, as here we see an older, wiser Robby than the player depicted on the weekend's cards. He's putting his best face forward despite being given the thankless task of managing a rudderless mess of an Orioles team that has started the 1988 season 0-6. They will lose another 15 in a row to set a new record for season-opening futility, and will drop 107 of their 161 games in all. 34 and a half games will separate them from the American League East Champion Red Sox.

I keep coming back to the '88 Birds because I have never followed a team that seemed poised, right from the beginning of the year, to challenge their complete and utter futility...until now. This team was supposed to be much better, but here I am watching an injury and slump-wracked jumble of castoffs and underperformers stumble all over the place. It's now June and they're stuck on 15 wins - five more than Rockies pitcher Ubaldo Jimenez. They are already 18 and a half games behind the Rays. I've had to put up with 34 games of Julio Lugo, 38 games of Garrett Atkins, and 20 of Lou Montanez. Most of the time, the bullpen seems to be comprised entirely of spare parts. I hate this.

This can't be fun to read on a weekly basis. I'm trying to make sense of a disaster of a season, and there are only so many ways to say that the Orioles are crummy.
Posted by Kevin at 10:49 PM