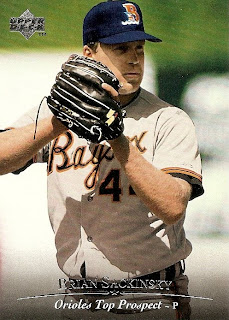 It's been over three months since I went to settlement and officially became a homeowner, and I am finally moving into my very own house this coming Saturday. Naturally, with all that time to prepare, I'm still scrambling at the last minute. I have trim to paint, a basement to clean, oodles of personal effects to pack, friends to beg for help in moving, and a full-time job to squeeze in there somewhere. So what I'm saying is that lengthy, thoughtful blog entries from yours truly this week will be as rare as mentions of Brian Sackinsky, the Orioles' second-round draft pick in 1992.

It will be a long while before this guy makes it back onto the blog, so I'll throw him a bone. He had pitched at Stanford University, meaning that the O's went with Cardinal players with each of their first two picks that year (the first, of course, was phenom outfielder Jeffrey Hammonds). Unlike his teammate Hammonds, Sackinsky had a slow journey to the majors, receiving his callup to Baltimore in his fifth pro season. The righty made three mop-up relief appearances in April of 1996 and returned to the minors, where he would stay until his career quietly ended two years later. In his brief stay in Charm City, Brian did strike out that season's A.L. MVP, Juan Gonzalez. It might not be much, but 16 of the 29 other players drafted in the second round in 1992 never even made it to the big leagues, so there you go.
Posted by Kevin at 11:26 PM

i'd offer help in moving, but i am moving myself this weekend.

"He wants me to help him move. You know, furniture. I said yes, but I don't feel right about it. I mean I hardly know the guy. That's a big step in a male relationship. The biggest. That's like going all the way."

"Last week I helped my friend stay put. It's a lot easier'n helpin' 'em move. I just went over to his house and made sure that he did not start to load shit into a truck." -Mitch Hedberg


"The Orioles suck even worse than Kevin says." -Commish Bob

Max - Best of luck, and solidarity.

FTB - I would've asked Keith Hernandez for help, but I was afraid he'd ridicule my patches of gray hair.

Bob - I love Mitch Hedberg. "I bought a donut, and the cashier gave me a receipt for the donut. We do not need to bring ink and paper into this transaction."