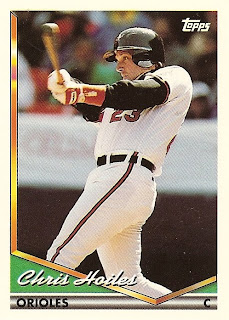 Chris Hoiles wore four different uniform numbers during his time with the Orioles. Two of those were #23 and #42, which happen to be a couple of the six numbers that have been an ongoing theme in LOST, a show that has been an obsession of mine for much of its six-year run on television. (The Numbers, of course, are 4-8-15-16-23-42. Some have noted that all six have been retired by the Yankees - but then, there aren't many numbers left that they haven't retired!) Tonight, LOST concludes its incredible and often confouding run with a massive two-and-a-half hour series finale. I can't wait to see how it all ends.

Speaking of numbers, I've received a couple emails from readers that indicate that something is awry with my NumerOlogy site. Broken links, virus alerts...I've got no idea what is going on, but for your own security, I wouldn't recommend visiting the site until I can figure it all out. Oh, technology.
Posted by Kevin at 8:10 PM

I actually know how "Lost" is going to end. I don't want to spoil it, but I have an inside source...apparently it's going to end with credits rolling.

William - Well, I'll be damned. You were right!

(Actually, that was a good guess on your part. Traditionally, the show hasn't ended with credits. The finale was a departure from the norm.)