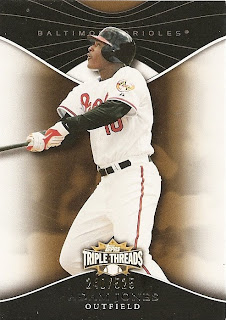 Tonight I came home after spending the early evening touching up the paint job at my new house and found a rectangular box wrapped in brown paper on the front porch. I instantly new that it was my new copy of the Strat-O-Matic baseball board game, the spoils of my victory in the White Sox Cards trivia contest. Naturally, I tore right in. I was surprised to find that the game board featured a panoramic photograph of the Oriole Park at Camden Yards playing field! I assume that they have team-specific stadium shots for each club, but that was a nice touch. My previous incarnation of the game featured a generic drawing of a baseball diamond.

After I spent an hour separating all of the player cards from their perforated sheets, I decided to take the 2009 Orioles for a spin. What better opponent than the hapless Kansas City Royals? Since K.C. is actually in town tonight, I chose to go with the actual starting pitching matchup: Brad Bergesen vs. Kyle Davies. This one looked like it would be a laugher as the Birds put up a five-spot in the bottom of the first and chased Davies with two outs in the inning. Five of the first six batters reached and scored, with the big blow coming in the form of a Matt Wieters three-run homer. But reliever Robinson Tejeda blanked the O's through the fifth inning, and they scored their only other run on an Adam Jones home run in the seventh.

Bergesen turned in a strong start, pitching into the eighth inning and allowing only a pair of solo home runs in the third. Danys Baez allowed an inherited run to score, but Nick Markakis ended the threat by gunning down his second runner of the evening at home plate. You just don't run on Nick. Jim Johnson earned the save with a perfect ninth inning, and the lovely final was a 6-3 Baltimore win.

...If only real life were so pleasant. The Royals are still hapless, Bergesen kept his team in the game and allowed three earned, but the bats sputtered for the umpteenth time in 2010. Other guys 4, our guys 3. Yuck. I think the O's need a 20-sided die.
Posted by Kevin at 11:47 PM

At least you can put a positive spin on another O's loss. If you want the negative stuff you can check out my blog... Keep up the good work Kevin!

Ryan - Well, I take it as a challenge. Now if you'll excuse me, I have some orange Kool-Aid to drink.