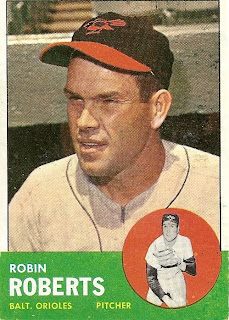 I really wish that I didn't have to spend so much time on this blog providing obituaries for the men who made baseball in Baltimore what it is today. I suppose it goes with the territory when your favorite team is in its 57th year of existence, and when the glory days of that club are several decades in the past. Still, it's been an uncommonly rough year for ex-Orioles. By my count, six have passed away in the first four months and change of 2010. That's not even counting former radio man Ernie Harwell and longtime traveling secretary Phil Itzoe. The world is moving on.

I don't have much to say about Robin Roberts, who died yesterday after a remarkable 83 years on this Earth. Within the past year or two I contemplated mailing him one of the few cards I own that shows him in his O's uniform, but I heard that he charged a few bucks for his autograph and put it on the back burner. Woulda, coulda, shoulda. Ultimately, there's nothing I can say about the Hall of Famer that would compare to the excellent and heartfelt eulogy that Joe Posnanski delivered in his blog yesterday. Please give it a read.
Posted by Kevin at 11:17 PM

I hadn't noticed till now but the inset photo is an airbrush of the inset from Roberts 1960 card.