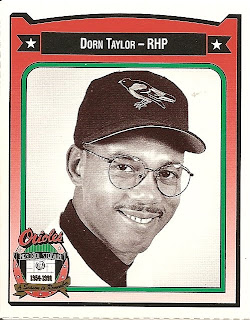 Last week there was a request from reader and frequently entertaining commenter William for Dorn Taylor. I take reader feedback very seriously, of course, especially when it allows me to show off a card of a guy who pitched a grand total of three and two-thirds innings in an Orioles uniform, all in 1990. Besides, he's the only "Dorn" in major league history (although his given name is actually Donald Clyde Taylor), and he looks kind of like Dwayne Wayne from the early 1990s sitcom A Different World. He's also from Abingdon, PA, roughly half an hour from my family's lakeside cottage in Northeastern Pennsylvania. Go figure.

In all seriousness, I've got respect for somebody like Dorn, who played college ball at a small Division II school in North Carolina (Pfeiffer College, which is now Pfeiffer University) and wasn't even drafted. He signed with the Pirates in 1981 as an amateur free agent and stuck it out for nine professional seasons, earning only brief cups of coffee in Pittsburgh and Baltimore in 1987, 1989, and 1990. You lived the dream, Dorn, and you did it with style.
Posted by Kevin at 11:35 PM

Quite possibly the most obscure O's player ever featured here. He holds the record for most career innings in AAA All-Star game competition. Seriously.

Well done, sir. I revere the title "Frequently Entertaining Commenter" -- it would look great in the "Up Close" section of the back of my Bowman rookie.

William - I'm glad you like it. I used to write for a goofy pro wrestling website, and referred to myself as a Respected Internet Journalist.