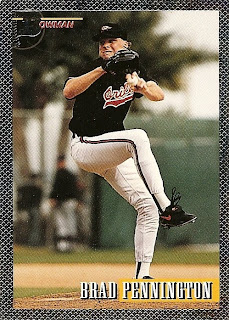 Tomorrow I'll be driving up to my family's lakeside cottage in Northeastern Pennsylvania for a long weekend getaway, but I'll leave a little something behind to tide you over. I was also hoping I'd be able to take a side trip to PNC Field to check out the Scranton/Wilkes-Barre Yankees (hey, Yankee affiliate baseball is still baseball), but their homestand ends tomorrow night and I don't think we'll be up for the 40-plus minute drive after the five-hour trip that morning and afternoon.

I'm sitting here reflecting on my past experiences at that ballpark. Since I was an awkward middle schooler, I've enjoyed going to these AAA games with my father every time we got the chance. For much of that time, the team was known as the Scranton/Wilkes-Barre Red Barons, and they were the highest affiliate of the Phillies. Lackawanna County Stadium (as it was then known) was built in 1989, and it was a nice cozy place by minor league standards. There was a wooded area and rock formations directly beyond the outfield fence, giving the impression that the stadium had been carved right out of the mountain. There were aluminum bleacher benches down the third base line, and they were cheap and general-admission and offered a great view of the field. They also afforded a close proximity to the visitors' bullpen, which meant that you could get a good look at relievers, coaches, and catchers as they made their way to and fro. Over the years, I saw many future stars and starters of the Phillies; I particularly remember the buzz about Chase Utley. The Red Barons faithful sitting near us raved about the young second baseman, and they weren't disappointed.

Of course, the 2007 season brought some unwelcome (to me, at least) changes. Several teams shuffled their AAA affiliations, and the Phils shuffled their allegiance to a new Allentown team. My least favorite team swooped in and unimaginitively rechristened the S/W-B club as the Yankees, lest I try to forget who I was watching. The new ownership did everything they could to make a buck, including selling naming rights to the stadium to PNC Bank, charging a parking fee (it's a minimal one, but $2 is still more than the zero that it once was), draping garish sponsor's ad banners around the upper deck, and - most hurtful of all - reclassifying the bleachers as season ticket sections. That's right. If I want to go to a game now, I'm stuck up in the nosebleeds. Thanks a lot, guys.
But no matter what they do to dampen the fan experience on Montage Mountain, I'll always have my memories. Like the time I heckled Brad Pennington as he strolled to the visitors' clubhouse from the bullpen in his Durham Bulls uniform. Or the night I joined several thousand Red Barons fans in jeering Darryl Strawberry as he went 0-fer while rehabbing with the visiting Columbus Clippers (they played police siren noises every time he came up to bat). Those were the days.
Posted by Kevin at 8:38 PM

I had tickets for tonight's doubleheader at SWB (I bought them a few weeks ago, when Strasburg was lined up to pitch today), but couldn't bring myself to make the two-hour drive from NJ without a chance to see the Second Coming pitch. (Plus the thunderstorms that rolled through here. Turns out I missed Kei Igawa setting the all-time SWB strikeout mark.)

But you're right -- it is a shame the Yankees took away the NE Pennsylvania feel and made it more of a corporate atmosphere, which as we all know, is the Yankee Way -- it's all business. I'm no fan of naming affiliates after the big league club (I'm planning a blog post of my own on that), so I didn't like that change, either. To me, the only good thing that came out of the whole affiliation shuffle and name change was that they use that cool tophat logo for the team.

Anyway, sorry to ramble. Have a safe trip and a good weekend.

It's sad how "big-league" a lot of minor league teams have gotten. It's not just Scranton, there are plenty of others.

Dan - Thanks Dan! I'm glad I'm not the only one who noticed the hostile takeover of SWB.

Greg - I really need to make it to a Bowie Baysox game (Orioles' AA team). They are halfway between me and my girlfriend, and have great promotions that are distinctly minor league (Office Space night, a tribute to "The Dude", etc.). Plus it would be distinctly less depressing than the O's.