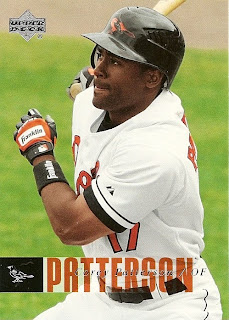 Tonight's results notwithstanding, Corey Patterson has been having a great time making my last blog entry about him look dumb. The O's won their first three games with him back in the lineup, and he had leadoff hits to ignite rallies in each game. He threw out the tying run at home plate to end a thrilling 6-5 win over Seattle on Thursday, and had three hits, a walk, and robbed a home run from Shin-Soo Choo in last night's 8-1 victory over the Indians. It's almost like he wants to stick around or something. If he keeps it up, Corey can stay as long as he likes.
Posted by Kevin at 11:24 PM

Corey's 2003 season started great, but he got derailed due to injuries. I remember back then people were coronating him as the next great thing in baseball. He was even on the front of Beckett. We should've learned our lesson the year before when that next great thing was Austin Kearns...he's had a decent career, but nothing to write home about. Corey falls in the same category.

William - I recall much ado about Alex Gordon as well.