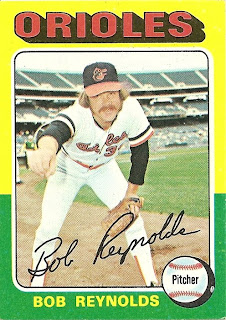 If you like reading about baseball cards on the Internet (and if you don't, I'm not sure why you're here), you probably know that there's an embarrassment of riches in the way of blogs on the hobby. I'm sure there are tons of great ones out that that I never get around to reading. I find the sheer volume to be overwhelming, and tend to stick to the tried-and-true few that have served me well for the last couple of years. One of those is Greg (a.k.a. Night Owl)'s blog, which is well-written with an always-inquisitive approach to cards and a self-effacing humor. Within the past year he started a second blog, which pays tribute to the 1975 Topps set that was a major part of his childhood. It's through the latter that I learned of a fantastic incident involving Bob Reynolds and another more famous Oriole.

Reynolds was known as "Bullet Bob" thanks to a blazing fastball that could register triple digits on the radar gun. He had two great years out of the Baltimore bullpen, appearing in 96 games between the 1973 and 1974 seasons and winning 14 games and saving 16 others. His earned run average was a paltry 2.25. But apart from that, Bob was a true journeyman; he bounced among six teams in parts of six big league seasons. He totaled just 44 games in the other four years.

Bob's last stop in the bigs was Cleveland, where he appeared in five games late in the 1975 season. At the time, the Indians were managed by Frank Robinson, who was also at the tail end of his playing career. Reynolds went to spring training with the club the following year, but didn't make the cut and toiled at AAA Toledo all season. As it happened, he was 34 days short of the minimum service time required to draw a major league pension. In midseason, the Indians played an exhibition game against their top farm team. Reynolds faced Robinson and retired him on a fly ball. As the future Hall of Famer was making his way back to the dugout, the pitcher shouted at him, demanding to know why he had been demoted. Frank didn't appreciate being challenged, even in an exhibition, and charged across the field to knock his ex-player off his feet with a surprise punch.

Reynolds claims it was a misunderstanding. As of the writing of this article (July 2003), the two had not spoken since that exciting game, though Robinson made an attempt to call his victim that very year and could not reach him.

All I know is that I wouldn't look at Frank Robinson sideways if I wanted to keep my teeth.
Posted by Kevin at 11:09 PM

There are a ton of blogs. I like that even though it's tough to keep up.

I was at that game. Reynolds got sucker punched and went down like a sack of potatoes. The crowd went crazy. Robinson got tossed out of the game.

One more thing. Reynolds threw one over Frank's head during that at bat, which probably did not help Frank's attitude.

Frank was one guy I would never of messed with. He was some competitor. He was featured in the booth of the Cards-Reds game tonight. But I was watching at a wings place and couldn't hear what he was saying.

Which leads me to my point. I almost never get to see the O's on the tube. I asked the wings place to switch a tv to the O's tonite and we watched from the 5th inning until the end. Back in the day I'd have been emotionally scarred by watching that 9th inning implosion. Now I'm just disgusted.

Night Owl - It's surprising that he had only the 1974 and 1975 Topps cards. You would think his previous achievements would at least merit a 1976 card.

Anon - The article I found about the incident mentioned it being a sucker punch but oddly did not reference the chin music pitch.

Bob - Thankfully, I was out with my girlfriend and didn't see the carnage. Trembley's major flaw is his nickel-and-dime usage of the bullpen. If you burn through five guys every night, one of them is bound to crash and burn.

Thank you for stating the truth!
Mrs. "Bullet Bob" Reynolds!