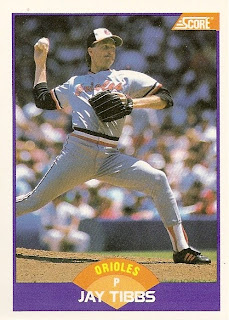 There's something rotten in the state of Denmark when I'm posting a second Jay Tibbs card in the span of three weeks. Jay probably wishes that I wasn't mentioning him, since I'm now bringing up his ten-game personal losing streak during that season. He actually started out 2-0 and 4-5 in 1988 before dropping the rest of his decisions that year. Strangely enough, he went undefeated for the O's in 1989, running up a 5-0 record in an injury-shortened campaign.

This brings us to current O's starter David Hernandez, who has now surpassed Tibbs' 10-game skid by losing 11 straight since starting his career 4-4. His is the longest ongoing skein in the major leagues, as you might suspect when it's May and a guy is winless since the previous August. David hasn't had much help, of course. The anemic Baltimore offense has put up a total of 21 runs in his seven starts, with only six of those tallies coming while he was actually in the game. The second-year hurler could use a break soon, or at least before he mounts a serious challenge to ex-Met Anthony Young's record string of 27 losses.

Of course, with Chris Tillman and Jake Arrieta knocking on the door, he might not get the chance to make such dubious history anyhow.
Posted by Kevin at 10:43 PM