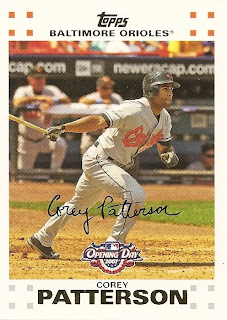 I've been anticipating this post for at least a week, but it still feels weird. Corey Patterson has returned. The simple fact that Corey and his .290 career on-base percentage are back, much less that he's being counted upon as a breath of fresh air by some, tells you in a nutshell just how poorly the season is going in Baltimore. Still, he's a good baserunner and a strong fielder, both of which are in short supply on this club. No one expects him to hit .368 as he was at AAA Norfolk, but even if he hit 100 points below that he would be miles above most of his new teammates...

...Including Lou Montanez, who must have photos of Andy MacPhail in a compromising position. I understand that Nolan Reimold was demoted so he could continue to get steady playing time and hopefully regain some confidence, but I don't see why Lou couldn't join him on the shuttle bus. He's a 28-year-old minor league veteran who has four singles in 35 at-bats. That's a .114 average to go with a .253 OPS (-30 OPS+). You can't tell me that any AAA outfielder at random couldn't give the Birds something more than that.

If there's anything that concerns me about Corey Patterson II: The Coreying, it's that Diamond Dave Trembley won't be able to resist the urge to bat him leadoff. Hey, he's a fast, slightly built guy, so naturally he bats first, right Dave? Ugh. Yes, the O's miss the steady presence of Brian Roberts at the top of the order, but I'd love it if the skipper could keep a guy with a sub-.300 OBP down low where he belongs. Corey's unfitness for the leadoff position has even been immortalized in t-shirt form.

By the way, Corey Patterson is batting first tonight. Ouch. Prove me wrong, ol' pal.
Posted by Kevin at 8:03 PM

We all know Corey is just a fill in and not a long term solution. That ship has sailed a long time ago. Hopefully he proves to be a steady veteran presence in the leadoff spot til we get Roberts back. Hopefully Reimold gets back soon and gets the lion's share of the playing time and AB's...

Jonathan - Well said. I'd take Jeff Salazar, Jeff Fiorentino, or even my Uncle Jeff over Lou right about now.

"Corey Patterson II: The Coreying" could be the funniest thing you have ever written on this site.

Corey Patterson is making you look like a real jackass.

Max - Thanks. I figured "Corey II: Electric Boogaloo" was overused.

William - I'll be happy to be proven wrong for as long as Corey wishes to keep igniting rallies and making game-saving defensive plays.

Found this baseball card stuck in a library book...