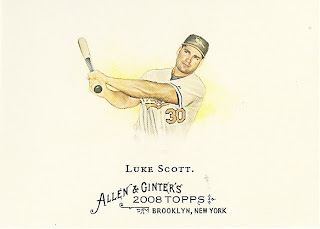 It's a poorly-kept secret that Luke Scott is a streaky hitter. Sometimes, it can be painful to watch him scuffle for extended periods of time, like the second half of last season (.208 AVG/.292 OBP/.375 SLG). But the upside is that when he gets hot, he's blazing. It's just plain fun to see him blasting the ball all over - and out of - the park.

In his first six games as an Oriole, Luke was 10-for-20 with three doubles and a home run. Over a nine-game stretch in June of 2008, he batted .387 with five homers and ten runs scored. He batted .485 and reached based at a .553 clip in a ten-game run that August, scoring eight times and tallying seven extra-base hits. And of course, there was a ridiculous 13-game swing in May and June of 2009 (interrupted by an injury) in which he batted .465 (20-for-43) and slugged 1.116, thanks to a double and nine home runs. He also drove in 20 runs and scored 14. Y'know, O's fans don't just bellow "LUUUUUKKKKEEEEE!!!" because it sounds neat.

Don't look now, but the soft-spoken, gun-toting, Bible-loving slugger is torching the opposition again. Since an 0-for-4 on May 4 left his average in a crater at .177, he has had 15 hits in his last 33 at-bats entering play tonight (.455). He's slugging 1.030, with a double, six homers, and 11 RBI in those nine games. That paltry batting average has been boosted 82 points to a healthier .259. Last night all he did was go deep twice off of 2009's Cy Young, Zack Greinke.

Whenever I hear an announcer start to say "Luke Sc..." I think they are going to say Luke Skywalker.

Bo - Haha. At Camden Yards, they sometimes play a Luke Scott highlights video interspersed with Star Wars clips. They even digitally alter it so that Scott looks like he's swinging a light saber.