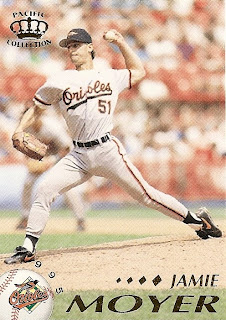 When this photo was taken, Jamie Moyer was a mere lad of 31 years. Sixteen years later, he has supplanted Phil Niekro to become the oldest man to ever throw a shutout in the major leagues at 47 years, 170 days of age. He accomplished the feat last night, two-hitting the Braves in a 7-0 Phillies win (his 262nd career victory, 40th-best all-time). When told of his place in history, Moyer's response was typically understated: "Really? Cool. Just doing my job."

If you've been reading me for a while, you know that I never tire of "Jamie Moyer is so old" trivia. As Joe Angel joked on the radio today, his first name has become "The 47-Year-Old". You can't say his name without mentioning his age in the same breath. Well, here's a great piece of business. Last night's two-hitter was the third of Jamie's career. The first came in his ninth career start, on August 16, 1986. Pitching for the Cubs, the southpaw defeated the Montreal Expos, a team that no longer exists. The losing pitcher was Floyd Youmans, who has not pitched in the majors for 21 years. The starting left fielder for Chicago was Gary Matthews, whose son is now a 12-year major league veteran.

I love the Gary Matthews (Sr. and Jr.) factoid. A double-card post with both Jamie and Gary Jr. on O's cards would be neat.

I heard on the radio a week or so ago that Tony Perez is currently the oldest living player to bat against Jamie. Looking him up on baseball-reference.com I found that his son, Eduardo Perez, retired after a 13 year career - 4 years ago!

Tim - In a previous post, I figured out that Jamie has faced four father-son duos. He never pitched to Eduardo Perez, sadly, but he has opposed the Fielders, Bells, Boones, and Jose Cruzes.

I also found that he pitched against the Griffeys (Jr - 8 for 25, 3 doubles and a homer, Sr - 0 for 1 with a walk). Of course, many people pitched against both Griffeys - they played on the same team for 2 seasons.

Others I found were Jesse and Josh Barfield and Tony and Tony Pena.