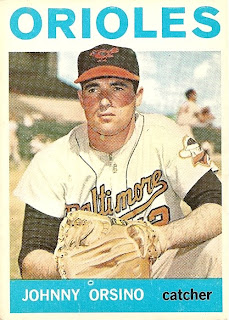 Today, May 21, is a momentous day. It is the 24th anniversary of the birth of the otherworldly being who will someday deliver all of Birdland from apathy, ennui, and suffering. Happy Wietersmas, everyone!
As coincidence would have it, two other (much less prominent) O's catchers also blow out the candles today: Chris Widger, who ended his career with a forgettable nine-game stint in Baltimore in 2006, is 39 today. Tommy Davis, a 2nd-round draft pick in 1994 whose entire career consisted of five games in mid-1999, hits the big 3-7.

As long as we're talking about catchers, let me throw a little love in the direction of John Orsino. "Horse" didn't have a particularly long career; he played in the majors for parts of seven years, but topped 25 games played only thrice. But he became a cult hero in Charm City in 1963, his only season as a primary starter. It was the Orioles' first season post-Triandos, and the 25-year-old Orsino had just arrived in a six-player trade with the Giants that was most notable for bringing veteran reliever Stu Miller to Baltimore. The new catcher grabbed some headlines in spring training by homering in each of his first five exhibition at-bats. He kept it going with a two-run home run in his first regular-season game, a 5-4 win over the Red Sox. The longballs just kept coming for John, as he finished the season with 19 of them. He posted a strong 133 OPS+ that led the team and ranked third among American League starting catchers, trailing only All-Stars Elston Howard and Earl Battey. He was also something of a Yankee killer, hitting three homers and driving in nine runs while batting .294 with a .940 OPS against the Bronx Bombers. The only team he did more damage against was the Senators (.353 AVG, 1.020 OPS, 3 HR, 11 RBI).
As I said, John wasn't long for this town. After slumping to .227 with 17 home runs over the next two seasons combined, he was traded to Washington and played only 15 games in two seasons to wrap up his big league career. But he's still a household name among longtime O's fans.
Posted by Kevin at 7:16 PM

Orsino's '63 Orioles are a special team to me. It was the first year I saw a game at Memorial Stadium. So many of my favorite players were there, Brooks, Aparicio, Boog (in the outfield!), Big Jim Gentile, Steve Barber winning 20 games! Great memories, thanks Kevin.

Bob - You're welcome! That was a great time to be growing up with the O's, for sure.

I know this is *checks watch* like seven years after the fact but I just found out that John Orsino is my uncle's cousin. When I saw that he played with the O's, I just knew he'd pop up somewhere on your blog...and here he is. Sadly, none of that major league talent is coursing through my veins since he is my uncle through marriage. Oh well.